Clinton Lost — But the Fight Isn’t Over Yet THE NATION IS STILL REELING from the results of last night’s elections. Some of its citizens are weeping tears of frustration and sadness, while others are celebrating like they haven’t celebrated in years. You can probably guess which camp Lady Clever falls into.

We — and by we, I mean Americans interested in preserving the rights of our fellow citizens, not jeopardizing them — saw this coming, and did what we could to prevent it, but our efforts fell short: Donald J. Trump has been elected the President of the United States, and Mike Pence is his Vice President. Both the Senate and the House of Representatives are now controlled by Republican majorities. The Supreme Court will now have at least one, and possibly two, conservative justices appointed to it in the next four years. Those of us who had most at stake in this election —  the women, the LGBT folk, the veterans, the people of color, the immigrants, and the disabled — are left to wonder and worry about what the future of an America under Trump and Pence will look like, and where it will leave us.

In her gracious and eloquent concession speech this morning, Hillary Rodham Clinton told her supporters that, while it was disappointing and painful to lose the presidency, giving up the fight was not an option.  She exhorted her supporters to continue striving for the ideals of dignity and open-mindedness and fairness that they held so dear, to do their part in healing the divides that wracked the nation, to keep throwing stones at the glass ceiling. She addressed young girls directly, asking them to never doubt their own value and power and rights to pursue opportunity. It was a poignant speech, drawing tears from many of her supporters in the audience. You can see and read her entire speech here.

During her speech, Clinton reminded her supporters that the election was never about her, or even one position of power. “Our constitutional democracy demands our participation, not just every four years, but all the time. So let’s do all we can to keep advancing the causes and values we all hold dear,” she added. Lest we get caught up in the despair of the lost presidency and the uncertainty of the future, we should remember that there were other elected positions, equally important in their own way, up for grabs last night. And while dozens of states doubled-down and elected conservatives — Republicans or otherwise — to public office, women, people of color, and LGBT folk made it into office, too. Here are some of last night’s more notable victories:

Stephanie Murphy — The first Vietnamese-American woman to be elected to Congress, representing Florida in the House of Representatives

Kate Brown — The first openly LGBT governor in the US, elected to govern Oregon

Kim Foxx — The first black person to be elected as Cook County State’s Attorney, in Illinois

Catherine Cortez Masto — The first Latina to be elected as a US Senator, and the first woman to represent Nevada in the Senate

Pramila Jayapal — The first Indian-American woman elected to Congress, representing Washington in the House of Representatives

Lisa Blunt Rochester — The first woman and the first black person to represent Delaware in Congress, elected to the House of Representatives

Other women, while not firsts, won important seats in the Senate, like Tammy Duckworth and Maggie Hasan. As mentioned before, these are all victories, and should inspire hope that the goals and visions of the Clinton campaign will not die with her defeat. We must work to support these newly-elected officials — historic or otherwise — as they legislate for our concerns and rights, so that when 2020 comes around, we will be able to right the mistakes of this election. We can’t idly wait four years, and hope that things will turn out better that time around. If we do, we’ll never be able to stack the White House and the Senate and the House of Representatives with officials who will uphold our rights, not trample and trod all over them.

To Hillary Clinton, we can only say this: we’re sorry that the nation wasn’t ready for your plans or your vision or your leadership. You would have made a great President, and not just because the other option was supremely, categorically unqualified to even think about holding public office. You would have been great, because you are. 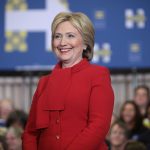