SINGER MIGUEL proposed to his long-time girlfriend Nazanin Mandi last month. And by “long-time,” we mean looooooong tiiiiime — the two have been dating for 12 years. It’s actually heart-warming to know that the fame — and all the temptations that come with it — didn’t lead to Miguel dumping his high-school honey. What’s not so heart-warming? Miguel’s outdated views on gender roles and wedding planning.

During an interview with James Corden on the The Late Late Show last night, Miguel spoke about his impending nuptials, saying: “I’m not getting involved in wedding plans – I’m going to leave that all to her. I think it’s really a woman’s thing… I know that she’s been wanting to be married and she had this idea of what it’s supposed to be and I don’t want to taint that, I don’t want to mess it up, because that’s all we do pretty much, is mess up our women’s dreams. So I’m not going to start off on the wrong foot.”

Ah, Miguel, it wasn’t enough for you to crush the dreams of millions of women (and some men) when you proposed to Nazanin? You have to crush hers, too, simply by the very fact of your existence? Like what, you’re gonna breathe and then her entire world is going to come crumbling down? Please. Well, if you’re gonna stay out of one “woman thing,” you might as well stay out of all them. You know what else is a woman thing? The kitchen. Hope you’re good at using Seamless, because otherwise you’re gonna starve. Also, fashion is definitely a woman thing. Say bye-bye to all the designer threads you rock. Ditto for those lovely locks, since salons are basically vagina motherships where women get together to talk about periods and childbirth and souffle recipes —  you know, women things. Gross, right?!We can feel you shuddering in disgust all the way from over here.

Miguel, do you really want to end up a bald-headed, raggedy-ass, emaciated-looking wash-up, just because you don’t want to do girly stuff? Come on. Give some input into your own (hopefully only) wedding. It’s not gonna kill you to pick a flower here or nix a centerpiece there. Trust, you won’t mess up anyone’s dreams. 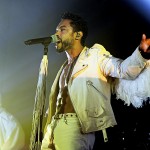