WHILE WE WOULD LOVE to be the kind of people that exercise to be healthy, for the sake of exercise itself, because we’re addicted to the rush of endorphins that we get from pushing our bodies past our limits… let’s be real: most of us only exercise so that we can fit into that certain outfit we’ve been wanting to wear for months or so we can afford to eat that extra slice of cake at this year’s holiday party. And there’s nothing wrong with using those kinds of goals as motivation, because any exercise, for whatever reason, is better than none at all. But you have to admit that sometimes (okay, all the time) you’d much rather be at 5 o’clock happy hour with your work pals than at 5 o’clock spin class with that smelly dude who always somehow manages to choose the bike right in front of you. Ugh. If only eating and drinking your weight in Brie and Cabernet counted as “exercise.”

The ladies over at Dirty and Thirty totally get where we’re coming from, and have even created a music video proving it… set to the tune of Taylor Swift’s “Blank Space.” Cleverly shot with hilarious and surprisingly spot-on lyrics —  we think “Holidays are a nightmare dressed like a daydream” neatly sums up that weird mixture of anxiety and joy we feel thinking about holiday feasts — the “Plank Space” parody video voices every complaint or crotchety thought we’ve ever had when it comes to exercising and living healthy lifestyles: “Okay, kale, we get it, you’re “healthy” and whatever, but could you at least try to taste a little less like ass?” “Why does it feel like thirty years have passed instead of thirty seconds EVERY FREAKING TIME we do a plank?” And one we’re not particularly proud of copping too but we’re pretty sure that we’re not alone in having thought: “You know what F**K the Victoria’s Secret fashion show!”

It’s nice to know that we’re not the only ones who think these thoughts and ponder the answers to these questions at the treadmill while we wait for our lungs to catch up with the rest of our bodies, and that we’re not the only ones who think you can get some nice bicep curl action going lifting a spoon to your mouth from a tub of Ben & Jerry’s. And on a more serious note, it’s nice to know that the ladies who are featured in this video, some of whom look like they spend more time at their local CrossFit gym than they do on their couch watching re-runs on Netflix, struggle with issues of motivation and temptation when it comes to sticking to a more active and conscious lifestyle. Because it’s always a good thing to try to be healthy, but pushing yourself too hard, denying yourself too much, might just cross over into the realm of the unhealthy. It’s all about leading a balanced lifestyle, right?

If you think this version is catchier than T-Swizzle’s, check the video and lyrics out over at Dirty and Thirty. Happy holidays! We wish you all the will-power and motivation in the world, but don’t worry, we won’t judge you if your cheat day lasts the entire month. 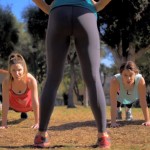