Red Ace Organic Beet Performance Supplements claim that daily consumption of the beet shot will “boost athletic performance,” “increase stamina,” and may even help lower blood pressure. So I tried it, for 5  days, performing 5 different workouts.

Don’t be misled by the name, Performance Supplement. This isn’t the kind of juicing that led to Lance’s title revocation.  The ingredients are simply organic beet juice concentrate, organic lemon juice, fair trade certified & organic Guayusa, (pronounced why-you-suh) and organic flavors. That’s less than 5 ingredients, all of which I can pronounce (thank you Google), plus bonus points for going organic and free trade. Right?

I’m a fairly athletic person. I run somewhere between 5 and 20 miles a week, go to yoga regularly, and do some additional circuit training too.  My routine norm has always been: wake up, work out, and then go to work. If I get it out of the way early, then there is no excuse later. It worked well for me until I got a job that requires me to be on my computer Skyping with London at 7am. Now my workouts have to fit in somewhere after 12n, which has recently left me with little motivation and a laundry list of excuses to not work out.

So any sort of athletic boost was happily received.

Setting out on the run, I did feel much more motivated than normal. Usually the first mile is easy for me,  but mile number 2 is when my brain gets the better of me (this is hard, you should turn around, aren’t hills bad for your knees anyway, walking is just as good for you as running) – not this time. I powered through it, hills and all. I was even smiling most of the time–yes, while panting.

Overall feeling:  I usually average just under a 10 min/mile, but considering the steep grades of this loop, coming in at 9:38./mile was impressive.  I was running faster and stopping less.  Maybe it’s just in my head. We’ll see if this lasts…

Nothing bores me more than going to a gym to workout. But today (2 hours after my Red Ace) I was gung ho about cardio. Couldn’t wait to do sprint intervals, and I even had extra energy, so I threw in a few stairs.

I felt great the whole time… didn’t stop once (except at a crosswalk, but I jogged in place). When I was done I thought to myself, maybe I should just keep going. I didn’t, but I thought about it.

Overall feeling:  I was running more efficiently. My breathing also seemed more controlled. Surprised at the energy I had at the end of the run as well.

This was my first time taking this class. Reviews claim it is an absolute “a** kicker” – as it is aimed to exhaust all 3 of your metabolic systems. The class starts with a cardio warm up, followed by 3 consecutive circuits with 90 seconds of rest time in between.  1 complete circuit consists of 11 full body exercises (lunges, free weights, and steps were involved), performed for 1 minute each with no stopping. You end the class with 3, 1 minute long cardio drills, and what felt like 5 minutes of AB-solute torture building up your abdominals and back, followed by a quick stretch.

Overall feeling: I wont lie and say this class was a breeze. Because it was hard!  But even during the hard parts, where I was expecting myself to lose steam, I had a lot more energy, and increased stamina. Breathing was also more controlled than I would have expected in a class like that. I walked out alive and kicking.

I did a jog to warm up my body and then I took a hot Vinyasa class.

Overall Feeling: No real difference that was noticeable, although, it wasn’t a particularly difficult class, and I usually feel great when I am in yoga anyway. Did feel like I was getting a little deeper into my stretches though.

Based on the past 5 days, I would say that there is definitely something to this concoction. It’s hard to describe motivation or quantify stamina and endurance, but I ran 5 miles in under 44 minutes and wanted to keep running – so that should sum it up right there.  But how?

As a superfood supporter, I know all about the benefits of beets –  but mostly in a liver/detox support context. Seeing it touted as an athletic enhancement was news to me. I know lemon juice is a highly  effective alkalizer – neutralizing acidity and restoring the proper pH balances within your body. And according to the wonderful world of Wikipedia, Guayasa is a caffeinated  “Amazonian holly tree native to the Ecuadorian Amazon Rainforest.” But with only 35mg of caffeine (equivalent to 1/3 cup of coffee) coming from this Amazonian additive, this leaf alone can’t be responsible for my 8 min 43 second mile… can it?

No. According to the website, it’s the nitrate-rich nature of the beets that are to thank for most of the magic.  When you ingest nitrate (from vegetables) it converts to Nitric Oxide causing dilation and widening of blood vessels. This in turn provides better delivery of oxygen to muscles, improved lung function allowing for bigger breaths as well as increased cardiac out put and blood flow. (read more here http://www.redaceorganics.com/about/science/)

Will I continue to drink it? Definitely. 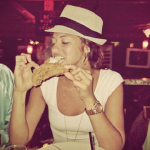