Exercise apps and fitness trackers are all the rage, and now a new study shows they might actually work.

The study of 210 inactive women found that three months of this combined approach increased the number of steps they took each day and their amount of moderate to vigorous physical activity.

Even if the women stopped using the mobile phone app after three months, they continued to get more exercise, the findings showed.

After the women had gained the skills and knowledge during the initial part of the study, they only needed the fitness tracker, not the app, to continue being more active, the University of California, San Francisco (UCSF) researchers explained.

The study was published online May 24 in JAMA Network Open.

“Studies show that engaging in at least 150 minutes of moderate-intensity physical activity per week can reduce the risk of cardiovascular disease, type 2 diabetes and certain types of cancer,” said lead author Yoshimi Fukuoka, a professor at the UCSF School of Nursing.

“Digital technologies are moving faster than research in transforming the way we promote physical activity and in reducing risks of chronic illness. But, in addition to an activity tracker and mobile app, having activity goals, self-monitoring and accountability are important,” Fukuoka said in a university news release.

Mobile phone apps and activity trackers are increasingly popular, but research on their effectiveness has been uneven.

The app used in this study was developed by the researchers and featured a daily message or video clip that reinforced seven concepts discussed during counseling, along with a daily diary for recording progress.

The app also included “summary,” “help,” “talk to us” and “weekly goals” options. Activity goals automatically increased 20% each week to a daily target of 10,000 steps.

“We plan to conduct a randomized, controlled trial that examines the effect of the AI-based physical activity intervention in those with cardiovascular risk factors,” she added. 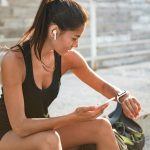