IN THE WAKE of Donald’s Trump successful bid for the United States presidency, the President-elect has confirmed many of his opponents’ worst fears as he begins to share his top picks for his Cabinet and other important positions. These are the people who Trump has selected to wield ungodly amounts of influence over the nation and its citizens:

Former Mayor of New York Rudy Giulani’s name has also been floated around for the Secretary of the Treasury position. If anyone tells you that you should “give Trump a chance to prove us wrong,” we give you permission to point to that list and tell them to kindly shut the hell up. Coupled with reports of increased violence against LGBT individuals, immigrants, Muslims, and other minorities around the country, it looks like Trump’s presidency is already emboldening the racist, the bigoted, and the violent of our nation to come even further out of the closet, so to speak.

Legislators in states are feeling emboldened by the results of the election and the events that have transpired since, as well. Fox59 reported yesterday that Indiana State Rep. Curt Nisly will file a “Protection at Contraception” proposal in January, when the General Assembly, controlled by Republicans, convenes.

Nisly’s legislation would make all abortions performed in Indiana illegal, and allow the state to prosecute anyone who participates in the procedure. Nisly told The IndyStar that the legislation would allow the state to “treat the death of an unborn child like [they] would any other human being,” meaning that the charges they could bring against mothers, doctors, nurses, and other health professionals could include first-degree murder, since abortion necessarily includes premeditation.

Abortion is a guaranteed federal right, as established by the U.S. Supreme Court’s 1973 ruling in Roe v. Wade. However, Nisly is calling for states to have ultimate jurisdiction when it comes to legislating the legality of abortion, claiming that passing such legislation would be “the state of Indiana asserting the powers that are given to them [sic].” While it would most likely be ruled unconstitutional by the U.S. Supreme Court as it stands today, Trump will be nominating one, possibly two or three, Supreme Court Justices during his tenure as President. A conservative-led Supreme Court might not be so quick to defend Roe v. Wade if a case made its way in front of them.

Abortions are already difficult to receive in Indiana. They can only be legally performed in outpatient clinics before the end of the first trimester (12 weeks), and women under 18 need parental permission or judicial bypass. Abortions in the second trimester must be performed at a hospital or surgery center, and once the fetus has reached 20 weeks, cannot be performed at all unless the woman’s life or health is endangered. The process requires two visits: an initial visit consisting of an interview and physical exam, and then a subsequent visit for the actual procedure. Abortion clinics in Indiana are not necessarily easy to come by, either. According to figures from the Guttmacher Institute, there were only 10 abortion clinics in Indiana in 2011. 93% of Indiana counties had no abortion clinic, and 61% of women living in Indiana lived in these counties.

If you live in Indiana and care about protecting women’s right to abortions, call your lawmakers and let them know how important this issue is to you. This is just the beginning of the next four years; we need to get ready to fight. 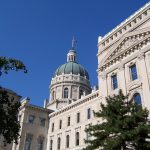