JUNE 7TH’s state presidential primaries, consisting of California, New Jersey, New Mexico, Montana, and the Dakotas, have come and gone, and have made official the outcome that many have been predicting for the past few months: Hillary Rodham Clinton has officially been declared the Democratic Party’s presidential nominee. Clinton’s haul of 379 delegates (as of AP‘s last count) has firmly put her past the threshold of the 2383 delegates needed to clinch the party’s nomination, and has dashed any hopes held by Senator Bernie Sander’s campaign for a historic upset.

Clinton, however, did make history last night: she is the first woman to be the nominee of any major party. As Nancy L. Cohen, author of Breakthough: The Making of America’s First Female President aptly put it on Take Two this morning, for the 227 years the United States of America has been electing presidents, those presidents have all been men. The candidates from which those presidents have been elected have all been men. To have a woman compete against white male candidates — who, incidentally, have been running the show for 219 of the 227 years we’ve been electing our Commanders-in-Chief — is groundbreaking. As Clinton said herself: “We’re all standing under a glass ceiling right now” — one she will break come November if she has her way. You would have to be an idiot, or willfully, criminally ignorant, to refuse to acknowledge the feat that HRC and her supporters have accomplished.

Both Sanders and Clinton have made women’s rights and equality central pillars of their campaigns, which is groundbreaking in its own right. Feminism and its proponents have been receiving public attention recently that they haven’t experienced in years, at least in this magnitude, and the movement has developed such momentum that it’s become one of the shaping factors of this year’s platform for both candidates. Clinton recognized the weight of the milestone, and nodded to the women and feminists who came before her when she addressed her supporters last night. She deftly dedicated the victory to the “generations of women” who have been working for this moment since the amendment to the U.S. Constitution granting women the right to vote was ratified by Congress 96 years ago, in 1920.

Sanders, while congratulatory of Clinton and her victories last night, has vowed to continue his campaign until the Democratic convention is held in July. He is also scheduled to meet with President Obama on Thursday, at Sanders’ request, to “continue their conversation about the significant issues at stake in this election that matter most.” While the road to the White House is effectively closed to Sanders with last night’s results, he still wields significant political capital and a dedicated following of supporters numbering in the millions. Whether his talk with the President results in his withdrawal from the race, his vocal support of Clinton, and his use of that capital to continue to push Clinton to the left on her political stances, as he has been doing, remains to be seen — but it would be the best-case scenario.

It also remains to be seen whether those Sander supporters who have also shown support for the #BernieOrBust movement — i.e. they will vote for no one, write in Sanders’ name, or, bafflingly, vote for Donald Trump, out of protest if Bernie doesn’t make it onto the Democratic ticket — will make good on their threat. What is unequivocally clear is that, regardless of Clinton’s shortcomings, real or imagined, a Clinton presidency would be a hundred, million, trillion times better for this country and all its people than a Trump presidency. In fact, Clinton would be a good choice for President even if she wasn’t the only alternative to a sociopath like Trump. The time for games is over. It was over the minute society recognized Trump for the misogynistic, pandering, racist — the epithets are endless, honestly — person that he is. Bernie supporters, take heed: if you truly care, vote blue, no matter who.

The alternative is to vote red, and then we’re all dead. 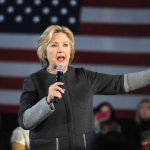