How Not to Nod Off Behind the Wheel

At least one in five fatal motor vehicle accidents involves drowsy driving, U.S. traffic safety experts say. So it’s vital that you recognize when you’re sleepy behind the wheel.

“The statistics are pretty jarring. Compared to drivers who report typically getting seven or more hours of sleep nightly, those who typically sleep only four to five hours per night are 5.4 times more likely to be involved in a crash,” said Benjamin McManus, a Ph.D. candidate at the University of Alabama at Birmingham.

“Drowsy driving can be considered a form of distracted driving. Like in distracted drivers, [mental] resources are directed away from the task of driving in drowsy drivers,” McManus said in a university news release.

Falling asleep while stopped in traffic or at a traffic light are dead giveaways that you’re too tired to drive.

“Recognizing the signs is the first step in prevention,” McManus said. Next, you can try a few different tactics to help stay awake, he suggested.

These include stopping and taking a nap; drinking a caffeinated beverage; or boosting alertness by adjusting the radio, opening a window, or talking with passengers.

Although these actions can help, they aren’t necessarily perfect solutions, McManus noted.

“Ceasing driving to take a nap may be the best of these commonly implemented countermeasures, as naps have been shown to reduce driving impairment in such situations,” McManus said. “Research tells us that, as a supplement to sleep, naps can be effective for maintaining sustained attention, learning and memory.”

According to McManus, research shows that a minimum of seven hours of sleep is associated with safe driving. However, many people don’t manage to get that much shuteye.

“A culture change regarding the importance of sleep might make the biggest impact of all. Currently, we tend to view sleep as one of the first things to sacrifice when we face impending deadlines or busy schedules. Recognizing just how dangerous drowsy driving can be is an important step in making us all safer on the road,” he concluded. 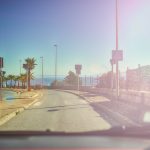