When Calorie Counts Aren’t on the Menu

Over the past few decades, the amount of food Americans eat away from home has increased from 18 percent to 33 percent.

At the same time, restaurant meals with oversized portions have become a major contributor to the nation’s obesity epidemic. While much of the blame has been aimed at fast-food places, these aren’t the only restaurants to supersize portions.

A study done at Tufts University found that meals from non-chain restaurants averaged 1,200 calories, about the same as offerings from the large chains. And meals from three of the most popular cuisines — American, Italian and Chinese — tallied even higher, close to 1,500 calories.

With 92 percent of restaurant meals delivering more calories than needed in one sitting, it’s pretty easy to gain weight.

Half of all U.S. restaurants are individual establishments or part of a chain small enough to be exempt from having to provide nutritional information — such as calorie counts — so you’re on your own for making careful choices.

Here are steps you can take.

First, watch out for the freebies, such as any tasty bites from the chef presented as you sit down, as well as a bottomless bread basket. Dipping bread in olive oil rather than spreading on butter cuts out saturated fat, but not calories, so skip it if you want to spend those calories elsewhere.

Ask questions about how dishes are made, and avoid ingredients that make it hard to eyeball portion sizes, like cheese, butter and cream. Better yet, ask what you can order without any fat and breading.

Preparation can make even low-cal vegetables less virtuous. Baked or steamed is always better than sauteed and fried.

Finally, balance out indulgent restaurant meals by eating healthier meals at home. If you eat out a lot, you might want to make your kitchen a snack- and dessert-free zone. 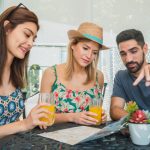