If you want to look cool, try smiling, researchers suggest.

Their advice counters the popular belief that showing no expression is the way to be cool.

The University of Arizona researchers asked volunteers to look at clothing ad photos in which models were either smiling or not, and to give the model a coolness rating.

“We found over and over again that people are perceived to be cooler when they smile compared to when they are inexpressive in print advertisements,” he said in a university news release.

The study was published online recently in the Journal of Consumer Psychology.

The findings could help people improve their interactions with others, the study authors suggested.

“This inaccurate belief about how to become cool can influence the way we communicate with others, and being inexpressive can hurt relationships,” Warren said. “It also makes it more difficult to understand one another. For these reasons, being inexpressive isn’t necessarily cool.”

Mental Health America explains the importance of connecting with others. 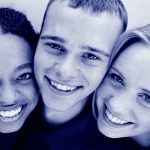