Using Devices as Babysitters Can Backfire on Parents

It’s an all-too-familiar scenario for many parents: Your preschooler starts to act up just as the phone rings or you start dinner.

Maybe you hand over an iPad or smartphone to soothe the child so you can get down to business.

And this probably does the trick. But if this is your go-to strategy, your child may be at risk for developing longer-term behavioral issues — especially boys and kids already hard-wired to be hyperactive or impulsive.

“If a child is upset and has big emotions and you hand over a smartphone or tablet to distract them, it may keep the peace in the moment, but if this is the main way you soothe your child, it will be a setback in the long run,” said study author Dr. Jenny Radesky. She is a developmental behavioral pediatrician at the University of Michigan Health Children’s Hospital, in Ann Arbor.

Instead, kids need to learn how to identify these emotions and develop self-soothing strategies, she said.

“Kids who don’t build these skills in early childhood are more likely to struggle when stressed out in school or with peers as they get older,” Radesky added.

For the study, the researchers looked at 422 kids and 422 parents, analyzing how often parents used screens to calm kids aged 3 to 5. Over a six-month period, the investigators charted kids’ emotional reactivity, such as rapid shifts between sadness and excitement, a sudden change in mood or feelings, and increased impulsivity.

The kids who were frequently given devices to calm down were more likely to show signs of emotional reactivity, the study showed.

“When a 3- to 5-year-old has an emotion, it feels like a surge of negative energy or frustration and they can’t name it or wrap their head around it, so they need a caregiver’s help to say ‘this is what you are feeling,'” Radesky said. “When parents label what they think their child is feeling, it helps the child connect language to feeling states, but they also show the child that they are understood.”

Another strategy is to satisfy the drive that is leading to the tantrum instead of handing a device over and shutting it down, she suggested.

If a child is missing Mom, for example, you can show pictures of her, call Mom or tell stories about Mom, Radesky advised.

She also said that you can use color zones to help young kids name and cope with emotions. With this system, blue is for bored, green is for calm, yellow is for anxious/agitated, and red is for explosive. This can be made into a visual guide posted on the refrigerator.

Parents can use these color zones in challenging moments, she said. “If your child is in the yellow zone, he or she can do breathing, take a break, listen to music or make another calming choice instead of progressing to red,” she said. “This is giving kids more agency over their emotions and reactions,” she noted.

For some kids, swinging, hugging, jumping on a trampoline or squishing putty in their hands can be soothing, she added.

Michael Mintz routinely counsels families about how to rein in an impending tantrum without relying on electronics. He is the associate director of the child development program at Children’s National Hospital in Washington, D.C.

Solutions depend on age, he said. “Trying to redirect kids away from what is causing them to be upset is a good first step for younger kids,” said Mintz, who wasn’t involved in the new study. “Say ‘you can’t have this item, but we can do this instead.'”

Not every tantrum requires an all-hands-on-deck reaction, Mintz stressed. “Babies cry when they are cold, hungry, or tired and need something, but parents of toddlers and preschoolers have to unlearn the response to soothe a child every time they get upset,” he explained.

Mintz recommends striking a balance. “Our job is to avoid reinforcing behavior by giving in when we say no or reining in tantrums by giving them so much attention. We don’t want kids to learn that whenever they tantrum, we will give in,” he said.

Screens overstimulate the brain with bright lights, loud colors and jarring noises. “We need to avoid teaching kids that the way to calm down is by overstimulating the brain,” he said.

That’s not to say there isn’t a role for screens in kids who are approaching a meltdown. “In the real world, there is a time and place for using screens to help calm kids, such as in a setting where a child must be calm,” Mintz noted.

Save your screens for these situations, he advised. “When you are home or in a setting when it’s OK to fall out, use the opportunity to practice calming and soothing your child in more mature ways,” Mintz said.

The study was published online Dec. 12 in JAMA Pediatrics.

The Nemours Foundation has more tips on handling tantrums. 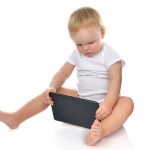