Too Few Kids Are Getting Recommended Vaccines, CDC Warns

About 93% of kindergarteners had their required vaccinations during the 2021-2022 school year, including the measles/mumps/rubella (MMR), diphtheria/tetanus/pertussis, polio and chickenpox vaccines, according to a new study published Jan. 13 in the Morbidity and Mortality Weekly Report (MMWR), a publication of the U.S. Centers for Disease Control and Prevention.

“While this might not sound significant, it means nearly 250,000 kindergartners are potentially not protected against measles alone,” Dr. Georgina Peacock, director of the CDC’s Immunization Services Division, said during a Thursday media briefing on the findings. “And we know that measles, mumps and rubella vaccination coverage for kindergartners is the lowest it has been in over a decade.”

About 2.6% of kindergarteners had an exemption for one or more required vaccine, compared with 2.2% for the previous school year. Of those 2021-2022 exemptions, 2.3% were for non-medical reasons, the results showed.

The exemption numbers are “encouraging” in that they have remained low despite controversy and misinformation related to vaccines, Dr. Sean O’Leary, chair of the American Academy of Pediatrics’ Committee on Infectious Diseases, said during the briefing.

While the numbers for kindergarteners are concerning, another MMWR report detailing vaccinations among toddlers born in 2018 and 2019 offered some degree of hope.

That study found that vaccination coverage among 24-month-olds remains strong, “and even increased among children born in 2018 and 2019, compared to those born in 2016 and 2017,” Peacock said.

More than 90% of toddlers had gotten the MMR, polio, hepatitis B and chickenpox vaccines, the study authors reported.

However, the researchers found disparities in vaccine coverage among toddlers based on location, income and insurance coverage, Peacock added.

“The report found that coverage with the combined seven-vaccine series for children living below poverty or in rural areas decreased by 4 to 5 percentage points during the pandemic,” Peacock said. “The report also found the percentage of uninsured children not vaccinated by their second birthday was eight times that of privately insured children.”

Gaps in vaccine coverage lead to “entirely preventable” outbreaks, O’Leary said, such as two measles outbreaks reported in U.S. communities last year and a case of paralytic polio in an unvaccinated person in New York.

“These outbreaks harm children and cause significant disruptions in their opportunities to learn, grow and thrive,” O’Leary added.

Peacock noted the pandemic likely played a role in the drop in vaccine coverage.

“We know that the pandemic really had a disruption to health care systems, and so I think part of it is that well-child visits maybe were missed and people are still trying to catch up on those well-child visits,” Peacock said.

Schools scrambling to deal with the pandemic also were probably less likely to gather required documentation on vaccinations, she added.

In addition, concerns over the COVID-19 vaccine likely caused some hesitancy about vaccines in general, Peacock noted.

“This could, in some cases, have translated over to routine vaccinations, and that’s something that we’re watching very closely,” she explained.

The CDC has launched a new initiative called Let’s RISE (Routine Immunizations on Schedule for Everyone) to promote vaccine coverage in the wake of the pandemic, she said.

“We must remain vigilant in efforts to ensure children get the vaccines they need to protect against serious diseases,” Peacock stressed.

The U.S. Centers for Disease Control and Prevention has more about Let’s RISE. 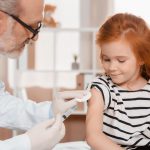