The Woody Allen Dilemma: My Father Is a Child Molester (Part 2)

In Part II of “The Woody Allen Dilemma,” our author explains how her father’s history impacted her family, and his new one.  At the request of the writer these posts will be published anonymously and weekly. Part III will be live the following week. Read Part I here. To help us to think of our father in a healthy way post-divorce, Mom was always careful to impress upon us that my dad was the first person who’d pull over to help start a car broken down on the side of the road on a snowy night, or to rescue an animal in distress. Compassionate and kind, he was also exceedingly charismatic and clever, knowledgeable about an array of topics from modern music to the mechanics of cars, and he was funny, incredibly silly.

But people kept their kids close around him, feeling rightfully uneasy at his effusive, manipulative charm. And when he got angry his icy demeanor would send shivers down your spine. Adopted away from a violent family riddled with addiction, and he and his brothers and sisters, both biological and otherwise, all had heinous histories of abuse and being victimized sexually. It must have been there that he learned how to flip that switch, going from wonderfully warm and engaging to chilly and cruel in but an instant.

Visitation privileges were pulled fast after my parents split, when my father had repeatedly shown up drunk to see us. Stumbling around with his pants literally pissed, he would tearfully explain that my mom had asked him to leave early (again), with no regard for the effect his guilt-laden laments had on us. My little sister was kindergarten-aged and would be wrenched with sobs. My brother was an infant who never saw him again after that and hasn’t ever to this day.

An occasional sloppily put together birthday card or desperate attempt at cheap Christmas gifts might show up to stoke new hope that he’d perhaps gotten it together, but from the age of eleven, I didn’t see my father anymore. Mom spent my teenage years wringing her hands over whether or not to tell me this sick story, and pressed that she would when I was old enough. But I grew to be more than old enough and was still, regrettably, uninformed when I finally encountered him as an adult at a family funeral. We were finally reunited. I was nearly twenty years old.

With a renewed sense of self, an unmistakable feeling of wholeness really, I gratefully welcomed his presence in my life. We swapped phone numbers and email addresses, but after a few feverish exchanges, eager to catch up, the replies weren’t coming anymore and it was obvious that his interest waned. I’d only get an occasional email, obviously composed while half-lit the way the shoddy birthday cards used to be, and just as sporadic.

At the next funeral about four years later, he arrived with a new family in tow.

I met his new wife, reminiscent of my own mom: blonde with a seemingly easy-going nature, quick to laugh. They met at Narcotics Anonymous– like something out of a Bronte novel, right? His new step-son, a somber teen, would later defecate in my father’s shoes when his mom divorced my dad. I shudder to imagine why. I met a shy, friendly tween in long blonde braids and a long floral sundress, his step-daughter. And I met a new baby, my littlest sister. She was a wondrous little wide-eyed replica of me except for a halo of shimmering golden hair bestowed by the other part of her family.

The younger sister I grew up with was with me that day, and she was graduating high school  that summer. Essentially an adult herself now too, it was her turn to try to move forward, and she was excited at the prospect of spending time with my dad and the new family we’d been introduced to, and delighted to be a big sister for the first time. Suddenly in a hurry to keep my sister from him, mom finally spewed forth all of the ugliness of his legacy to me, only in hopes of saving her younger daughter from him. I don’t remember being surprised to learn of the depths of his depravity, but I don’t remember why I wasn’t.

Not only did I share the burden with my sister, I also used my new knowledge to dispatch messages to his wife, ill at the thought of her leaving two young girls in his care without knowing what he was capable of and who he was. My mom and the new soon-to-be-ex-wife even talked on the phone, Mom confirming what I’d told the woman and even sent documents in the mail from the “trespassing” arrests and other offenses.

We felt relieved. We’d done the right thing. The ex told us about bouts of domestic violence that had already sent the pair on the path to divorce. All she had to do now was keep her own girls safe from him, the way my mom had narrowly managed to protect us. But his ex too was an addict, and she was prone to long disappearances. The girls were left in his care often and unsupervised, until she and my father eventually both signed away all parental rights to the little platinum-haired girl who looked like me and had our blood flowing in her veins.

By then it was too late. 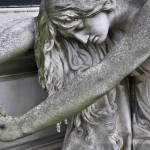