Before you let your parental frustration get the better of you, a new study suggests you should refrain from spanking your misbehaving youngster.

Researchers analyzed data from more than 12,000 children in the United States and found that those who had been spanked by their parents at age 5 had more behavior problems at ages 6 and 8 than those who had never been spanked.

“Our findings suggest that spanking is not an effective technique and actually makes children’s behavior worse, not better,” said study author Elizabeth Gershoff, a psychological scientist at the University of Texas at Austin.

The increase in behavior problems among children who were spanked could not be explained by child or parent characteristics, or the home environment, according to the study published Nov. 16 in the journal Psychological Science.

“Parents spank for many reasons, such as their educational or cultural background, or how difficult their children’s behavior is,” Gershoff said in a journal news release.

“These same reasons, which we call selection factors, can also predict children’s behavior problems, making it difficult to determine whether spanking is in fact the cause of behavior problems,” she explained.

So the researchers used a special statistical model to further assess the link between spanking and increased risk of behavior problems.

“The fact that knowing whether a child had ever been spanked was enough to predict their levels of behavior problems years later was a bit surprising. It suggests that spanking at any frequency is potentially harmful to children,” Gershoff said.

“Although dozens of studies have linked early spanking with later child behavior problems, this is the first to do so with a statistical method that approximates an experiment,” she said.

But the study could not prove that spanking actually caused later behavior problems.

The American Academy of Pediatrics has more on spanking and child discipline. 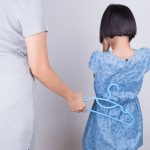