Slide the City LA: Making a Splash Amidst a Drought WHAT’S going on with this heat, LA? When temps chart over 95 (on the Westside), the only things on my mind are frozen Otter Pops, plastic pink Raybans, squirt guns and slip ‘n’ slides. Summer in a nutshell. And what epitomizes summer better than a slip ‘n’ slide?

How about a GIANT slip ‘n’ slide running through the streets of downtown LA? No, this isn’t a typo. It’s very much a fact. On September 28th, when Slide the City comes to town, that’s exactly what you can expect. A self-proclaimed “family-friendly slip and slide water party event,” Slide the City is exactly what their name implies. The company travels from city to city setting up a larger-than-life slip ‘n’ slide (1,000 feet long, to be exact) across a stretch of city street for people to – “slide the city.” The events also feature live music, food and drinks to accompany the water fun, making for what by accounts sounds like a ton of good time… except for the tiny fact that LA is going to host a giant water slide and we’re in a drought. At the risk of coming off like Debby Downer Tree Hugger, how does bringing a slip ‘n’ slide water party to a city in a drought-stricken state seem like a good idea? It’s estimated that between 15,000 and 20,000 gallons will be used to slick that slide up, and while both event promoters and the city officials who signed off on the event promise that the water will be recycled for further use, it still leaves a bit of a bad taste in the mouth. Yet, I have no doubt that tons of tickets have already been sold and throngs of people will show up on September 28th in all their water-fun regalia for a splashing good time.

Don’t get me wrong. Conceptually, I’m a big fan of this event. It’s unique, and a perfect end to summer fun. If we weren’t amidst a water shortage, I’d have already purchased VIP tickets. And while my eco-conscience just won’t allow me to participate in good faith, some people just don’t seem to care that much. So long as water is still flowing from their faucet, they don’t feel threatened by the drought. Like that neighbor down the street that still has his sprinklers going off every morning like it’s the water show at The Bellagio. And people just want to have a good time. They don’t believe that any change is going to come from their individual boycott — the show will still go on — so why sit it out and let other people have all the fun? Yet, the people who oppose the event keep coming back with the same question — how do you justify a giant slip ‘n’ slide during a water crisis?

Well, here’s how some do. Some, certain water conservationists included, actually welcome the slide because they claim that in the grand scheme of things, the amount of water that Slide the City will use will be a drop in the bucket compared to daily water usage by Angelinos. (Slippery slope, in my opinion). So why not let the public have some fun? City officials agree, and hope that this event will reinvigorate people’s interest in Downtown Los Angeles. Smells like political machinations to me.

I find myself in a love/hate relationship with Slide the City. As I’ve said, it’s a super cool event, and if this heat persists, it’ll be a welcome activity for friends and families to get out and have some fun together while managing to give the AC a break, too. But I do think the timing is off for LA. Even if water usage is not that substantial, what kind of message are we sending our youth and communities? No matter which way you look at it, there’s just nothing cool about running an enormous water slide in the middle of a drought. One the one hand, the city and state spend millions of resources and tons of time trying to educate the masses about water shortage and water conservation, and then on the other, they roll out the red slip n’ slide and say “Come! Come frolic in all of this precious water that could be used for hundreds of other useful purposes!” Talk about a crash course in hypocrisy.

No doubt, thought, I’ll be a sack full of envy on September 28th as I sit at home with my Frozen Otter pops. Damn my inner conscience for exercising its better judgment on this (why are you choosing to take an environmental stance now?!), but at least I’ll sleep better knowing that I didn’t partake in recreational water usage when our state is knee-deep in a drought.

Let us know in the comments how you feel about Slide the City. Will you be slidin’ with the best of them or are you gonna leave yourself high and dry on September 28th? 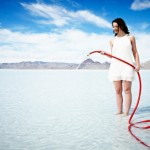