The more orgasms you have, the more you come to expect.

And the reverse is also true, according to a new study of the so-called orgasm gap — in which men climax far more often than their female partners.

“Our expectations are shaped by our experiences, so when women orgasm less, they will desire and expect to orgasm less,” said study author Grace Wetzel, a doctoral student in social psychology at Rutgers University in New Brunswick, N.J.

“If women do lower their expectations in this way, the more orgasm inequality may perpetuate in relationship,” she said in a Rutgers news release.

The study underscored a well-established gap in which men climax much more often than women, which the study said can lead to lower expectations among women.

The findings were recently published in the journal Sex Roles.

“The orgasm gap has implications for women’s pleasure, empowerment, sexual satisfaction and general well-being,” said Wetzel, who advocates for orgasm equity to her social media followers.

“Importantly, this is a gender equality issue,” she said. “Women are learning to expect and be satisfied with less in their sexual interactions with men.”

These findings suggest that orgasm inequality likely worsens rather than improves within a relationship when women climax less often than their male partner and then place less importance this kind of sexual pleasure.

The Rutgers authors said it’s important to increase women’s expectations for and entitlement to orgasm during sex with men in order to break this cycle. 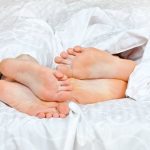