The Beginning of the End: Model Demotion Never be the last to leave the party.

In real life, I get that. I’m usually the first to French exit, dipping out before things get sloppy and the conversation starts leaning heavily on some chemical crutch. In work life, however, I’ve had a harder time letting go, anchored to the proverbial party on the faulty promise of Maybe.

For as much complaining as I do, modeling has been harder to leave than your average midnight fête; I feel like I’ve been here for one hundred years, watching the same champagne and canapés make the rounds, bored out of my mind since nearly the moment I walked in. You spend most of your time contemplating leaving, weighing your options: Is this place really as bad as I think it is? Should I stick it out another hour? Well, maybe something interesting will happen. I guess the people are attractive. And then, all of a sudden, the sun’s gone down and the day is gone and no one is in the room. No one.

If you don’t leave modeling, modeling will certainly leave you, and it is a graceless, sloppy, sudden departure.

The other day I had to send my portfolio link to someone who asked for it. Go to here and there and there, I instructed, pointing them in my direction via the Internet. “I can’t find you,” they responded. Upon further research, I discovered I had indeed disappeared, no longer visible as a square head with big hair in between two other girls.

“Is there a reason I’m not on the board?” I wrote my booker, suddenly awash in this old familiar panic, an adrenaline rush stemming from helplessness, worthlessness, and an adulthood bill-paying panic. My modeling career has been peppered with an honest handful of moments like this: a flare-up of legitimate or mostly illegitimate concerns that I will never work again. Only things have changed slightly since my last real one: I’m no longer financially dependent on modeling. I don’t technically need it anymore. Still, a horrible feeling hits the pit of my stomach, saps the energy from my limbs. Like it or lump it, this job has given me context for the last decade. Letting it go for good will most certainly be a death of some sort.

I am promptly sent a link for where my portfolio lives, hidden somewhere in the model graveyard equivalent known as “FIT AND SHOWROOM.” This means, quite officially, that no one wants to hire you for anything more than as a human coat hanger. They don’t want to see your face, your hair, your smile. You are a body, it says, and nothing more.

I’ve been living with this reality for the last few years, ever since I moved to New York and was confronted with the high competition of an army of younger, prettier girls. You keep getting marginalized, pushed towards the edge of the party until you are backed against the corner, watching the girls in mini dresses and high heels dance amongst glittering confetti, raising their arms up like you once did, unaware that one day, they’ll be just like you. 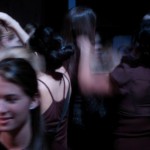