The Game of Thrones star is an avid Twitter user, with 1.14 million followers, and also regularly posts pictures and updates for fans on her Instagram and Facebook pages. Suffice to say girl is plugged in. However, while she insists she is “pro internet,” Williams is aware that there’s a downside to sharing your life with people online, and thinks more efforts need to be made to stop internet trolls in their tracks.

“I’m so pro internet and also pro technology,” Maisie insisted to Britain’s InStyle Magazine. “We need to find a solution to online bullying – that doesn’t mean taking away all the things that make the younger generation the younger generation. This is who we are. This is what we’re going to take forward with us. I don’t think the answer is to take that away. It’s about finding a solution online.”

“There are so many things already – you can mute, report and block abuse you experience online. It’s just about making them more effective. For all the sweaty geeks in the office trying to get Facebook back up and running when it goes down, there should be an equal number of people replying to the support section and getting that bit sorted as well.” “Sweaty geeks” jibe aside, we’re all for more involvement and accountability from social media users when it comes to policing the platforms they frequent.

As mentioned, Williams has become extremely well-known, thanks to her role as Arya Stark in fantasy series Game of Thrones, as well as starring as Ashildr in several episodes of Doctor Who. She also starred as Casey in 2015’s Cyberbully, a teen whose entire digital existence is hacked by an online stalker who claims he’s punishing for her own online bullying transgressions. While the circumstances of the film’s plot are a little far-fetched, the despair Williams’ character feels when she realizes she’s powerless against her anonymous abuser mirrors the despair actual victims of cyberbullying feel, and the despair Williams felt herself when she was a victim of online bullying after she started gaining attention from her performance on Game of Thrones. “I just felt like, ‘Yeah I am a teenager,’ but actually there’s something really, really wrong and not being able to reach out,” she explains in an 2015 interview with the BBC. “I remember being sat on the train right next to my mum and scrolling through messages and messages and messages. My heart just dropped and you get that lump in your throat and you’re trying not to cry.”

While she is more than appreciative of her success, she also finds it irritating when people dismiss those who have found fame through YouTube, such as Zoe “Zoella” Sugg.

“They’re like, ‘Eeew, that’s not real famous,'” Maisie said of some people’s responses to YouTube fame. “So, what is real famous? It’s ridiculous. You can be as nasty as you like about technology, about the younger generation, but it’s not going to stop. So often we idolize people we don’t have a clue about.”

“Whereas if you sit on the computer and tell everyone about your whole life, they’re like ‘OMG – you’re really cool.’ There are no secrets. When someone is totally honest to a camera and you sit there and watch it, it’s a new kind of fame.”

While Arya Stark might not believe this credo (she is a trained assassin for a cult of death-god worshippers, after all), we’re pretty sure Williams is down to just live and let live when it comes to social media. Here’s hoping that the only people sliding into your DMs are fans and not detractors! 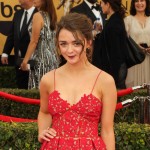