After just a month, the results for people adopting this strategy were “striking and reinforce the importance of dietary changes” for those with problematic blood pressure. So says a team of researchers led by Dr. Stephen Juraschek, of Beth Israel Deaconess Medical Center in Boston.

Millions of Americans fight a daily battle with high blood pressure, which can greatly increase their odds for stroke and other heart events.

Current recommendations from the U.S. Food and Drug Administration call for a daily limit of about one teaspoon of salt (2,300 milligrams of sodium) per day.

The study participants, who averaged 48 years of age, were also randomly asked to stay on either a “regular” diet or switch to the healthier Dietary Approaches to Stop Hypertension (DASH) regimen.

This diet is often recommend by doctors and nutritionists and focuses on fruits, vegetables, whole grains, low or fat-free dairy, fish, poultry, beans, seeds and nuts.

The participants’ blood pressure averaged 135/86 mm/Hg at the start of the four-week study.

At the end of that time, results varied greatly depending which regimen the person had followed.

The effect was event more robust, however, for people who were on the DASH diet and cut their daily salt intake, Juraschek’s team said.

For example, people who started the trial with systolic blood pressure readings at or above 150 mm/Hg saw an average decline of almost 21 points if they ate healthier and slashed their salt intake.

Even for people with “mid-range” hypertension lost an average of 7 to nearly 10 points in systolic blood pressure if they cut their salt and switched over to DASH, the study found.

Juraschek’s team says further research is needed to determine if the combo diet has the same effect for adults with systolic blood pressure that rises even above 160 mmHg.

Two heart specialists were encouraged by the results.

Dr. Antonella Apicella is an outpatient dietitian who helps counsel heart patients at Lenox Hill Hospital in New York City. She said that “although positive effects on systolic blood pressure were also seen in individuals who followed a low-sodium or DASH diet alone, this study supports the notion that the combination … is most beneficial for blood pressure control in individuals with pre- or stage 1 hypertension.”

The findings were published Nov. 12 in the journal JACC: Cardiovascular Interventions, to coincide with a presentation at the American Heart Association’s annual meeting, in Anaheim, Calif.

The U.S. National Heart, Lung, and Blood Institute has more on the DASH diet. 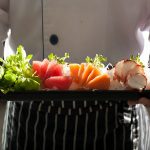