If a study conducted at one St. Louis hospital is a good indicator, the COVID pandemic is tied to a surge in childhood injuries and deaths due to firearms.

Black children and those in low-income households were at greater risk, according to the University of Missouri-led study.

“We found a significant increase in pediatric firearm injury rates during the pandemic compared to the five preceding years,” said lead study author Dr. Mary Bernardin. She is an assistant professor of emergency medicine at the University of Missouri School of Medicine, in Columbia, Mo.

“The escalation in injuries was driven by a significant increase in firearm assaults and homicides, as well as increased frequency of innocent children injured as bystanders amidst adult crime,” Bernardin said in a university news release.

For the study, the researchers compared records of pediatric firearm injuries treated at St. Louis Children’s Hospital from March 2015 to February 2020 to those treated between March 2020 through March 2022.

In addition, pediatric firearm deaths rose 29% during the pandemic, the investigators found.

The researchers identified three spikes during the pandemic in monthly pediatric firearm assault/homicide rates — each occurred within three months of a surge in COVID-19 deaths.

“This trend is particularly noteworthy because as surges from future COVID-19 variants are likely to occur, one may infer that these surges may be related to future spikes in firearm injuries,” Bernardin said. “This threat highlights the need for increased violence-intervention services, particularly amongst marginalized communities more likely to be seriously affected by firearm violence.”

The findings were recently published in the Journal of Pediatric Surgery.

The U.S. Centers for Disease Control and Prevention has more on firearm violence prevention. 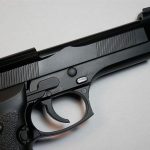