Elementary School Kids Get Healthier When Gardening Is on Curriculum

A Texas-based education initiative has found that enrolling children in poor communities in gardening and cooking classes may help boost their long-term health.

The end result? Among the kids, there was a notable post-class drop in the risk for becoming pre-diabetic and diabetic, as measured by lower blood sugar levels, and lower “bad” cholesterol levels.

“We know that diets high in added sugar, specifically sugar-sweetened beverages, are linked to higher risk of type 2 diabetes in children, teens and adults,” explained study author Jaimie Davis, an associate professor of pediatrics at the University of Texas at Austin.

“We wanted to design and evaluate an intervention that taught kids to garden and cook in a school setting [focused] on diet, obesity and type 2 diabetes risk factors,” she noted.

The goal, said Davis, was to influence dietary habits by “essentially teaching kids where their food comes from and how to grow and cook with it.”

The idea is that “if kids have ownership and autonomy over what they eat, they are more likely to have increased preference for that food and this preference can last a lifetime,” she added.

All of the children were between the ages of 9 and 13, and all were enrolled in elementary schools in the Austin, Texas, area.

Every year between 2016 and 2019, the schools were randomly assigned either to launch a nine-month long Texas Sprouts program or to delay the launch until the following year.

Kids in the program were offered a total of 18 one-hour classes throughout the school year during school hours, averaging out to two classes per month. Their parents took one class per month for nine months.

Classes covered topics such as gardening/planting rules in a quarter-acre outdoor setting; kitchen safety; the difference between processed foods and real food; information on the ins and outs of sugary drinks, dietary fiber, food groups, food portions, vegetables, fruits and water; and how to eat healthy while both at school and “on the go.”

At the program’s end, the study team analyzed blood samples taken from almost 700 children, nearly 500 of whom were Hispanic. Roughly 450 were also from low-income households, based on eligibility for a free or reduced-cost school lunch.

The investigators found that, when compared with students who had not yet participated in the program, those who had already completed the Texas Sprouts program saw a drop in blood sugar levels. Blood analyses identified a notable 0.02% drop in HbA1c level over the three months prior to testing; an HbA1c test is a standard indicator of blood sugar patterns.

At the same time, those in the gardening/cooking program experienced a 6.4 mg/dL drop in their LDL (or “bad”) cholesterol levels.

The program was not linked to any similar improvements in terms of insulin, insulin resistance or blood fat levels.

Still, Davis stressed that after two decades in the field and dozens of exercise and nutrition trials, “no other intervention that we have tested is as effective as this garden-based one.”

So, “while the intervention was only one school-year long, hopefully it will result in continued intake of fruits and vegetables in these kids throughout their childhood and into adulthood,” she said.

Meanwhile, Davis suggested that the take-away is very clear: “Teaching children to grow and prepare their own vegetables will increase intake of vegetables, which can have effects on lowering disease risk.”

Connie Diekman is a food and nutrition consultant and former president of the Academy of Nutrition & Dietetics. She is a fan of the Texas Sprouts initiative.

“I love this idea,” said Diekman. “And it would be nice if we can figure out how to do this in more schools. Food preferences are not just biological, they can be learned, and allowing kids to experiment with foods they might not otherwise eat, along with their peers, is a great way to develop better eating habits.”

At the same time, she cautioned that the program should be viewed as a start, not an end in itself, given that “health parameters don’t change overnight, just as behaviors do not change overnight.”

“So, what this study indicates to me as a registered dietician is that teaching [and] exposing children to produce — how to prepare it, how to enjoy it and why it is good for us — can lead to behavior change,” Diekman said. “Knowing that behavior change is a process, I would see the Texas Sprouts program as a foundation for developing healthier habits that can be built on to yield better lifestyles.”

The report was published online Jan. 10 in JAMA Network Open.

There’s more on the important role of vegetables in pediatric health at Utah State University. 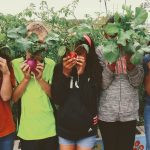