In the fourth and final installment of “The Woody Allen Dilemma,” our author reaches the conclusion to her story.  At the request of the writer, these posts will be published anonymously. Read Part I, Part II, and Part III. My father has no convictions for molestation or sexual assault, despite being a known pedophile in our family and our community at large. The police didn’t handle his deviant acts the right way and so they aren’t recorded as such. Our cousin’s family never reported his abuse. My mother never reported it on their behalf when he admitted it. By the time he admitted it to me, too many years had passed and I couldn’t alert the authorities. We warned his second wife with a series of emails and even mailed her court documents of his greatest hits, but we didn’t save more girls from his grasp.

An abused and troubled boy who grew into a conflicted and violent man, my own father has put evil and sickness into the world as a man who has molested, and lusted after, young girls within and close to our family, and violated women who were unfortunate enough to encountered him by chance circumstance. In his refusal to seek help and try to get well, he’s given his children no choice but to walk away from him.

I look back sometimes, though.

I look back and, sometimes, I can’t see a monster. I see a man who taught me about music, art, photography, and culture. I see a man that loved holidays, whether it was putting up the Christmas tree with meticulous care and explaining the origin of each ornament, or delighting in a rowdy, drunken backyard fireworks show he put together just for us. From hot summer nights helping fix cars on the cool garage floor, to collapsing with laughter in front of the record player while transferring my vinyl Smurf albums on to cassette tapes, I had ten years with him that were beautiful, as far as I remember. I feel intense guilt that my brother and sister didn’t get those ten years. I had ten more years where I knew there were whispers about my mom’s ex husband, but I all knew was that I missed my dad.

When the truth was finally given to me, I was shell-shocked, I was sick. It’s hard to say I didn’t believe it. It’s hard to imagine a world where I questioned if my poor cousin might have made up that he molested her. It’s tough to swallow that I did wonder for a moment if, not unlike the accusations against Mia Farrow, maybe my mom had run with the story out of vengeance, to poison Daddy’s Girl against him. But he told me himself. All those years later he said it into my ear over the phone line from hundreds of miles away and chilled me to my very core.

Not only did he do it, he’d never been stopped. He’s still out there, foreign to us now, hollow-looking in mug shots we look at on Google. Does he have another new wife or a girlfriend, careful this time not to let us get close enough to tip her off again? Is he someone’s step-dad or do we have more brothers and sisters he’s conceived with good intentions and raised with bad ones?

Because the monsters are there whether we choose to see them or not. 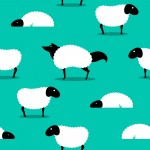