Closed Baby Formula Plant May Reopen by Next Week

A baby formula plant closed in February at the heart of the current U.S. shortage of the product could reopen as soon as next week, U.S. Food and Drug Administration Commissioner Dr. Robert Califf told House lawmakers on Thursday.

The Abbott Nutrition’s Michigan formula plant is the largest in the nation, and it was closed due to contamination issues.

Earlier this week, the FDA announced a preliminary deal with Abbott to restart production if safety upgrades and certifications are met.

However, even after production resumes, it could take about two months before new formula from the plant starts appearing on store shelves, Abbott has said.

“We had to wrestle this to ground with Abbott,” Califf told members of the House Appropriations subcommittee, the Associated Press reported. “I think we are on track to get it open within the next week to two weeks.”

Califf is the first Biden administration official to testify before Congress on the shortage, which has left some parents desperate to find formula and become a huge political issue.

On Wednesday evening, President Biden announced sweeping measures to boost formula supplies in the United States, including invoking the Defense Production Act and importing formula by air from overseas.

“I know parents all across the country are worried about finding enough infant formula to feed their babies — as a parent and as a grandparent, I know just how stressful that is,” Biden said in a video posted on Twitter. He said he was ordering his administration “to do everything possible to ensure there’s enough safe baby formula and that it’s quickly reaching families that need it the most.”

The Abbott plant was shuttered after the FDA began looking into four bacterial infections in infants who had consumed formula from the plant.

Earlier this week, Califf said the investigation is ongoing and hasn’t yet determined whether bacteria from the plant caused the infections. Abbott has said there is no direct evidence linking its products to the illnesses.

At Thursday’s appearance before the House subcommittee, Califf evaded questions about why the FDA waited until February to begin its investigation when the first infant infection was reported in September, the AP reported.

Califf’s claim that he couldn’t comment on the situation due to the ongoing investigation was rejected by several lawmakers.

“It’s not acceptable to say you just can’t comment on it,” Rep. Mark Pocan (D-Wisc.) said. “This is a problem I’ve seen over and over with the FDA: You guys aren’t good at communicating.”

The delay in launching an investigation was slammed as “unconscionable,” by Subcommittee Chairman Rep. Sanford Bishop (D-Ga.), the AP reported.

“American people rely on FDA to protect infant health by ensuring that they have access to safe formula,” Bishop said.

HealthDay has tips from experts for parents struggling to feed babies in this crisis. 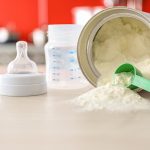