If you’re not one of the popular kids with dozens of “besties,” you can take solace in new research that suggests having close friendships is better for your adult mental health than having many friends in high school.

“Our research found that the quality of friendships during adolescence may directly predict aspects of long-term mental and emotional health,” said study leader Rachel Narr, a graduate student at the University of Virginia.

“High school students with higher-quality best friendships tended to improve in several aspects of mental health over time, while teens who were popular among their peers during high school may be more prone to social anxiety later in life,” she said in a news release from the Society for Research in Child Development.

Each year, the study volunteers answered questions about their friendships, and about how they were faring in terms of factors such as anxiety and symptoms of depression. Their close friends also talked about the friendships in interviews.

The researchers considered some of the friendships to be high-quality, meaning that the friends were attached to each other, supported each other and were up-front with each other.

The teens who made a priority of close relationships at the age of 15 were less socially anxious, had more self-esteem and appeared to have fewer symptoms of depression by age 25 compared to the other study volunteers, the findings showed.

However, the kids considered to be more popular by their peers in high school had more social anxiety as young adults, according to the report.

The study was published Aug. 22 in Child Development.

“Our study affirms that forming strong close friendships is likely one of the most critical pieces of the teenage social experience,” said study co-author Joseph Allen. He is a professor of psychology at the University of Virginia.

“Being well-liked by a large group of people cannot take the place of forging deep, supportive friendships. And these experiences stay with us, over and above what happens later. As technology makes it increasingly easy to build a social network of superficial friends, focusing time and attention on cultivating close connections with a few individuals should be a priority,” Allen said.

It’s important to note that this study was only designed to look for an association between friendships and mental health. It did not prove cause and effect.

The American Academy of Pediatrics has advice for parents on how to help kids make friends. 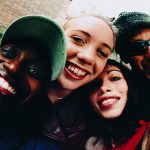