Five children have died in a mysterious wave of acute hepatitis that has sickened dozens of kids across the United States during the past seven months, the U.S. Centers for Disease Control and Prevention announced Friday.

Overall, public health officials have identified 109 children in 25 U.S. states and territories stricken with the liver condition, according to Dr. Jay Butler, the CDC’s deputy director for infectious diseases. Their average age has been 2 years.

“More than 90% of these patients under investigation were hospitalized, 14% received liver transplants, and more than half had a confirmed adenovirus infection,” Butler said during a media briefing on the cases.

Despite the recent reports, pediatric hepatitis remains rare in this country, and there has not been a significant overall increase in cases or liver transplants among children, Butler added. He also noted that a majority of the patients identified recovered fully from their illness.

The identified children were otherwise healthy. Typically, hepatitis strikes kids who are immune-compromised or suffering from some other chronic illness, experts said.

“It’s unusual because this is occurring in normal, healthy kids who don’t have an underlying condition,” said Dr. Tina Tan, an infectious disease doctor with the Ann & Robert H. Lurie Children’s Hospital of Chicago. “Nobody knows the true cause, and what makes it more scary is that these kids develop very severe hepatitis.”

There also are hundreds of other pediatric hepatitis cases that have been reported in countries around the world, according to the World Health Organization.

“CDC is also aware of pediatric hepatitis cases of unknown cause recently reported in other countries, and we are working closely with public health officials around the world to understand what they are learning,” Butler said. The United Kingdom alone has reported more than 160 cases under evaluation, he noted.

Tests have ruled out the common causes of viral hepatitis — hepatitis A, B, C, D and E — and the children are too young to have received the COVID-19 vaccine, Butler said.

“COVID-19 vaccination is not the cause of these illnesses, and we hope that this information helps clarify some of the speculations circulating online,” Butler said.

A specific strain of adenovirus has been identified in at least some of the children, leading experts to suspect it might be triggering the life-threatening liver inflammation, the CDC said.

Adenovirus type 41 commonly causes diarrhea, vomiting and fever in children, sometimes accompanied by respiratory symptoms, the CDC said. It’s not been previously identified as a cause of hepatitis in otherwise healthy children.

The single case identified in Delaware, a 2-year-old girl, had adenovirus detected in her stool and in her blood, said Dr. Adebowale Adeyemi, a pediatric hepatologist at Nemours Children’s Hospital in Wilmington, Del.

“When you have adenovirus detected in multiple samples, then it’s not a far stretch to say that it’s also in the liver,” Adeyemi said. “We’re pretty certain that the adenovirus has to be implicated here.”

It’s also possible that an adenovirus could be causing an immune response in the body that’s triggering the hepatitis, Butler said.

“The viral load by the time of diagnosis is fairly low,” Butler said. “That may be a reflection of the fact there is an immune response that’s kicking in that’s beginning to limit the amount of virus that’s in the body, and may also be potentially damaging the liver.”

Further, the CDC has not ruled out the potential of a previous COVID infection to be a factor in these cases, Butler said.

“The issue of whether or not COVID infection may be related to these cases is still under investigation and certainly a hypothesis that we continue to pursue,” Butler said.

The first U.S. hepatitis cases cropped up in October 2021 at Children’s of Alabama, a hospital in Birmingham.

Five children with significant liver injury — including some who had gone into liver failure — showed up at Children’s of Alabama within a matter of weeks. The cluster in Alabama has since grown to at least nine cases.

As part of its investigation, the CDC asked public health departments across the nation to search their records for pediatric hepatitis cases extending back to Oct. 1, 2021.

Tan and Adeyemi recommend that parents keep a close eye on children with cold and flu symptoms, and take them to the ER if they become jaundiced.

“If they start to notice that their kids are having severe abdominal pain, or that the whites of their eyes are turning a little bit yellow or their skin color’s a little bit yellow, they really need to seek immediate medical attention so that the child can be worked up for hepatitis,” Tan said.

The U.S. Centers for Disease Control and Prevention has more on pediatric hepatitis cases of unknown cause. 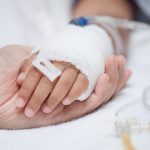