With the growing popularity of electric scooters, the number of kids injured while riding them has jumped dramatically, a new study finds.

Moreover, those injuries have become more severe: In the past decade, the number of patients admitted to hospitals after an e-scooter accident rose from one in 20 to one in eight.

The findings beg the question of whether young kids should be using e-scooters at all. Often regulations about their use are left up to local areas and, in many places, no regulations exist and no training on their use is required, the investigators said.

“The regulations surrounding the use of these scooters vary widely across the country,” said lead researcher Dr. Harrison Hayward, an emergency medicine fellow at Children’s National Hospital in Washington, D.C.

According to the American Academy of Pediatrics, children under 16 should not operate or ride on e-scooters. Yet, the average age of patients in this study was 11.

For the study, Hayward’s team collected data on nearly 1,500 e-scooter injuries reported to a national database of pediatric injuries from 100 hospitals. The investigators found that over 10% of the patients had a head injury, including concussions, skull fractures and internal bleeding. Broken arms were the most common injury (27%), followed by minor abrasions (22%) and lacerations that needed stitches (17%).

The number of patients admitted to a hospital jumped from just over 4% in 2011 to nearly 13% in 2020, the researchers noted.

Hayward added that the majority of e-scooter crashes involve running into an object, like a lamppost, or hitting a pothole or a pedestrian. But collisions with cars have also been reported, he said.

Often, the youngest kids injured are riding the scooter with an adult, Hayward noted. “We did a study where we looked for levels of injuries among 4-year-olds,” he said. “For a pretty surprising proportion, they were actually on the scooter with another older person.”

Hayward said that only one person should be riding the scooter and they should be wearing a helmet and traveling in a bicycle lane.

Pam Shadel Fischer, senior director of external engagement at the Governors Highway Safety Association, said that “anybody who’s too young to have a driver’s license should not operate or ride on an electric or motorized scooter.”

Helmets are essential when riding a scooter, she added. “I don’t disagree with those who say, helmets don’t cause crashes,” she said. “But lack of helmets definitely causes some of the injuries that people sustain.”

She believes that state legislatures need to regulate the use of these scooters by setting age limits and putting them in the same class of transportation as bicycles.

It’s also up to parents to ensure that their young kids aren’t using e-scooters.

The findings were presented Saturday at the American Academy of Pediatrics annual meeting in Anaheim, Calif. Findings presented at medical meetings are considered preliminary until published in a peer-reviewed journal.

For more on e-scooter safety, head to the U.S. Consumer Product Safety Commission. 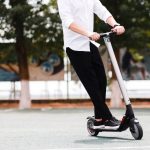