Adele Sells Out In Seconds; Fans Try 1000s of Times HELLO? IT’S ME. I was wondering if you managed to get tickets to the Adele concert.

Didn’t think so. Well, you ain’t the only one, unfortunately. Tickets for her August 2016 show at the Los Angeles Staples Center went on sale at precisely 10:00 AM Thursday morning… aaaaanndd they were sold out by approximately 10:01 AM. Take it from us — we witnessed the frustrations firsthand as at least five of our coworkers are alternately crying in disbelief and staring at their screens in resignation — this sh*t is heartbreaking, especially after all the well-deserved hype Adele has been receiving in the past few months since the release of “Hello” and 25.

Log in to Twitter and you’ll see thousands of fans who, at least, managed to find some humor in their rage and disappointment.

When someone tells you they managed to score #AdeleTickets pic.twitter.com/sL0wCVVLeH

Waiting for my turn in the #adeletickets queue like.. pic.twitter.com/M8jjQJL0wq

how the world feels recalling their attempts to buy #adeletickets this morning pic.twitter.com/hd21rHSmS2

When you wait 45 minutes for #adeletickets and it says there are no more available. pic.twitter.com/5Aeg1t3x5M

See? You’re in good company. Except we know you’d rather be in the company of people like this Twitter user:

Have lots of fun, you lucky a**holes. We bet you don’t even really like Adele. For the rest of us, guess we’ll have to make due with streaming Monday’s NBC concert special “Adele Live in New York City” over. And over. And over again. At least a thousand times.

They say that time’s supposed to heal ya… we have a feeling we ain’t doing much healing. 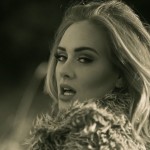