A Dangerous New Twist on Cyberbullying

As if the idea of teen cyberbullying isn’t harrowing enough, a new study warns of a strange twist in which kids anonymously post hurtful messages — to themselves.

The worry is that this digital self-harm — like traditional self-harm — may be a harbinger for suicide down the road, the study authors said.

In the first survey of its kind, the nationally representative group of nearly 5,600 U.S. high school students was asked about “self-cyberbullying.” The kids were all between the ages of 12 and 17. And about 6 percent said they had engaged in the practice.

The risk for doing so was highest among those who had previously been victims of cyberbullying or bullying themselves.

“It is not specific to any particular online environment,” Hinduja said. “It can occur through SMS [texting], email, social media, gaming consoles, web forums, virtual environments, and any other online platform yet to be conceived.

“A little more than 7 percent of boys and 5 percent of girls were found to engage in digital self-harm,” he added.

While these percentages aren’t large, “they do indicate a problem when extrapolated out to the millions of teens in the U.S.,” Hinduja said

The pool of high school participants in the study was evenly divided between boys and girls. Nearly 350 teens said they had posted something mean about themselves online.

Boys were “significantly” more likely to have done so than girls. Race and age didn’t seem to affect risk.

Kids who identified as gay were about three times more likely to say they had cyberbullied themselves or posted something unkind about themselves, the researchers found.

About half the digital self-harmers had done it just once. Over a third had done it multiple times, and 13 percent had done it many times, the study found.

Almost half offered explanations as to why they did it. The explanations included self-hate; wanting attention; wanting to appear victimized to justify cyberbullying others; feeling depressed or suicidal; trying to be funny or make fun of themselves; and boredom.

Similarly, those who had used illicit drugs, stolen something, seriously hurt someone physically, developed symptoms of depression, or had engaged in traditional (offline) self-harm (cutting, scratching, biting or hitting oneself), were all significantly more likely to self-cyberbully.

Parents and educators “need to make sure we are discussing this phenomenon among adolescents,” he added, “so that they can understand its reality and offer support if someone in their peer group opens up to them.

“I’d encourage those adults to also encourage the kids and teens in their lives to always know that they are there to serve as a listening ear without judgment or criticism,” Hinduja said, and to also be prepared to offer alternative options for addressing their emotional turmoil.

Sarah Feuerbacher, clinic director of the Southern Methodist University Center for Family Counseling in Plano, Texas, suggested that self-harm stems from a feeling of “a lack of power and control, usually over another person or an environment.” She was not involved with the study.

“A child who is suffering may have a perception that there is not a trusted person in their environment in which to safely release that pain,” Feuerbacher said.

That may turn the “great wide open of the internet” into an alluring outlet for pain, she added, given the control teens can exercise over its content, with the hope that someone may read their “message in a bottle.”

The study was published recently in the Journal of Adolescent Health. 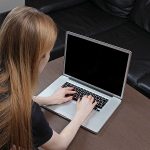