Two companies are issuing new recalls on Monday for millions of previously recalled rocking sleepers for infants, with about 115 infant deaths possibly linked to use of the sleepers so far reported.

With both products, the Fisher-Price Rock ‘n Play Sleepers and the Kids2 Rocking Sleepers, infants have rolled from their back to their stomach or side while unrestrained, in addition to possibly other circumstances linked to death.

Fisher-Price said Monday it is now recalling 4.7 million of its Rock ‘n Play sleepers; its initial recall was made on April 12, 2019.

At that time, 30 incidents where babies had died had been reported with the Rock ‘n Play Sleepers. About 70 more deaths have been reported since that initial 2019 recall, including at least eight that happened after the recall.

Both companies said they have been unable to confirm the circumstances of what happened or whether the product was their product in some of the reports, CBS News reported.

The Fisher-Price Rock ‘n Play Sleepers were sold nationwide at stores including Walmart, Target and online at Amazon from September 2009 through April 2019 for between $40 and $149.

If you have one of the recalled products, contact Fisher-Price for a refund or voucher. You can do so online at Rock ‘n Play recall or www.mattel.com and click on “Recall & Safety,” or by calling toll-free at 866-812-6518 from 9 a.m. to 6 p.m. ET Monday through Friday.

Contact Kids2 for a refund. Call toll-free at 866-869-7954 from 8 a.m.to 5 p.m. ET Monday through Friday or visit Rocking Sleeper recall or www.kids2.com and click on “Recalls” for more information.

It is illegal to sell or distribute the recalled sleepers.

The American Academy of Pediatrics has more on safe sleep. 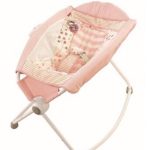