A combination of yoga and aerobic exercise may benefit people with heart disease, according to a new study.

The study included 750 obese Indian heart disease patients with type 2 diabetes. They were divided into three groups. A group of 225 patients did aerobic exercise, a group of 240 did yoga, and the remaining 285 did both.

All three groups saw improvements in their heart disease risk factors after participating in three sessions of the activities lasting six months each.

But patients who did both yoga and aerobic exercise had two times greater reductions for those measures than the other groups. They also had significant improvements in heart function and exercise capacity, the researchers said.

The study was to be presented Thursday at the Emirates Cardiac Society Congress. This meeting is in collaboration with the American College of Cardiology Middle East Conference, in Dubai.

“Heart disease patients could benefit from learning Indian yoga and making it a routine part of daily life,” Tanwar and Sen said in a meeting news release.

Findings presented at meetings are typically viewed as preliminary until published in a peer-reviewed journal.

The U.S. Centers for Disease Control and Prevention has more on heart disease. 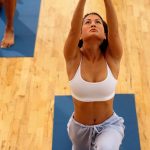