NORTH CAROLINA used to be known for its beach towns and… well, honestly,  just its beach towns. Now, it’s also known as a state that’s officially hostile to trans people.

Recently, the issue of which bathroom transgender people should use has been brought into the spotlight on a national scale. North Carolina lawmakers made the active decision to bar trans men and transwomen from using the bathrooms they feel comfortable using, forcing them to instead use the one coordinating with their birth gender. House Bill 2, the Public Facilities Privacy and Security Act, was signed into law to stop men from using the women’s locker room — according to Governor Pat McGrory. This trend to proactively limit the rights of trans people — and it is a trend, with 14 anti-transgender bills circulating the legislatures of  9 other states — is a plague on human rights and the activists who work hard to achieve them, not to mention the actual trans people affected by it.

My friends, family, and coworkers — even people within earshot at bars — have flocked to me in order to hear my personal opinion. I am not the spokesperson for all transgender people in the known world, but I don’t write something unless I think it deserves to be read.

I am a transgender woman. I use the women’s bathroom. The end.

I’ve been on hormone replacement therapy for over a year now. I wear makeup. I wear women’s clothing. I’ve had work done on my face, and recently had a breast augmentation. I can’t imagine a man welcoming me into the men’s bathroom, unless it is to sexually harass me or to physically cause me harm.

I’ve used the women’s bathroom since Month One of transitioning. It did feel bold, but beyond the initial time, it felt natural, as if every time I’d been in a rest room surrounded by men had actually been a sick hoax. Whenever I go to the women’s bathroom, I don’t hesitate, look around, or check the corridor. I walk right into the bathroom. Why, do you ask? To use the toilet or to touch up my makeup. That’s all. Not to tell my story to people, not to write “Cisgender people suck” with lipstick on the mirror, and not to steal toilet paper. The bathroom was designed for very few activities, if you actually think about it. Contrary to popular teen movies, no one actively uses the bathroom as a social gathering venue.

For those that believe being trans is a guise for sexually-deviant behavior, that legally codifying discrimination will protect women and young girls, as they claim it will: no number of draconian laws is going to prevent rule-breakers from breaking the rules. Predators will continue to be predators — although it needs to be said that, in every case the conservatives backing the bill cite as proof that men will take advantage of this law to gain access to the women’s restroom, the perpetrators were cis men and not actual transwomen. There is a difference, and we should make one thing very clear: transwomen are not predators, nor do they pose risks to the people around them. Being myself shouldn’t make me fall into the category of heightened risk factors. According to my doctor, I’m a woman, and, after some legal hurdles, the government of the United States of America will recognize me as a woman, too. I take pride in what every American citizen has the right to do: use the restroom in peace and with the expectation of privacy. I want to enjoy that right as much as the next person, which means I will not be infringing on yours while I exercise mine.

I would use the ladies’ bathroom if it was 2005, 2015, or 2050. Yes, I’m from the South, so I understand the risks involved, but I’m well-informed and I’ll take my chances. The National Coalition of Anti-Violence Programs reports that 55% of LGBT homicides in 2014 were transgender women. I guess because gay men and lesbians are able to use corresponding bathrooms, this leaves ample opportunity to single out one of America’s most — if not the single most — endangered minorities. I think I’m more preoccupied trying not to get killed than checking bathroom signs or peeking under bathroom stalls.

My heart, spirit, and mind were made for the women’s bathroom, but physically my body has not completely caught up — although, hell, I’m trying. I don’t expect everyone in the world to understand this. Trust me when I say, though, that I’ve been in the bathroom with hundreds of women in the past year. None of them confronted me or got confronted by me, and none of them attacked me or got attacked by me. We all just did our business and left. They might have seen a transgender woman walk in when they saw me, but they paid more attention to the word “woman” than they did to “transgender.”

If only North Carolina and the rest of the United States would do the same. 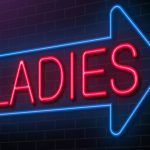