If you were up all night and you ache all over the next morning, your lack of sound slumber might be to blame.

New research found that sleep loss delivered a double whammy to the brain that all but guaranteed greater levels of body pain.

And “in two regions called the striatum and the insula, sleep deprivation decreased the activity associated with pain [relief],” he added. These regions control the release of dopamine, often called the “feel-good” hormone.

Krause is a Ph.D. candidate with the Center for Human Sleep Science at the University of California, Berkeley.

During the study, 25 healthy, young participants got the normal eight hours of sleep one night. A week or so later, the same group underwent a night of no sleep whatsoever.

After each session, all the volunteers underwent “thermal pain sensitivity” tests, followed by MRI scans to monitor brain activity while their legs were exposed to uncomfortable levels of heat.

After a full night of sleep, most participants reported feeling heat discomfort at about 111 degrees Fahrenheit.

But after a night of no sleep, that pain threshold dropped to 107 degrees F.

The research team then surveyed 60 adults (average age 38) over a 48-hour survey period. All had reported experiencing pain during the survey period, and all were asked to: keep sleep diaries; report mood and anxiety levels; rank pain intensity, when experienced.

“We found that reductions from one night to the next in the quality of the sleep, rather than just the quantity — total hours asleep — predicted worse pain the following day,” Krause noted.

“The optimistic takeaway here is that better sleep can help manage and lower pain. [It’s] a natural analgesic that we can all pick up in repeat prescription each night, if we choose,” he said.

“It is our hope that this research especially encourages health care systems to bring sleep closer to the center of treatment. If we can improve sleep conditions in the setting in which patients are most often in pain — the hospital ward — perhaps we can reduce the dosage of narcotic drugs and clear hospital beds sooner,” Krause suggested.

The findings were published Jan. 28 in the Journal of Neuroscience.

“There is very strong evidence to date — and the current study supports this again — that short or disturbed sleep, either in clinical [settings] or in the general population, increases our experience of next-day pain,” Haack said.

“And a number of studies, including the current study, have shown that sleep is a stronger predictor of pain than pain is a predictor of how we sleep,” she added.

“I think the most important and novel finding of the study is that the authors found a biological basis, neuronal brain structures, that correspond to the pain sensitivity increase observed after sleep loss. Only if we understand the biology and mechanisms underlying this relationship will we be able to develop target- or mechanism-specific strategies to prevent pain-processing changes associated with short or disturbed sleep,” Haack concluded. 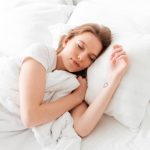