Why Obese People Find It So Tough to Slim Down

Obesity is no picnic for those who struggle with it, but new research sheds some light on why so few ever find their way to a healthy weight.

It turns out that overweight and obese folks hold starkly different views on diet and exercise than their normal-weight peers, the study found. Namely, taste is their top consideration when choosing what to eat, nutritional labels are rarely examined, and their relationship with food tends to be more impulsive and emotional.

And while many were open to the idea of smaller meal portions, they were on the other hand less likely to exercise than normal-weight people.

Cost was also a factor, with many believing that healthier foods were more expensive.

What does all this mean for public health efforts to tackle America’s obesity epidemic?

“A major disparity exists between food-related policies and the mindsets and motivations of the people these policies are designed to impact,” said report author Hank Cardello. He is director of the Hudson Institute’s Food Policy Center in Washington, D.C.

“Previous Hudson Institute studies have confirmed that healthier items are where the [food product] growth is coming from,” Cardello stressed.

But that trend just doesn’t seem to apply to overweight and obese Americans, whose “eating patterns and attitudes reflect the more traditional consumer mindsets exemplified in the ’70s and ’80s,” he explained.

“This suggests that the traditional educational approaches, which attempted to change eating behaviors, would not be effective,” Cardello added.

While 44 percent of the healthy weight group said that health and nutrition was a top three concern when buying food, that figure fell steadily as weight status rose. Only a third of the most obese participants felt the same.

Nearly two-thirds (62 percent) of the most obese respondents admitted knowing they should eat healthier but not doing so. And they were more likely to ignore nutritional labels, and to opt for snacks, chips, pastries, baked goods, ice cream, cookies and soda.

They were also less likely to avoid sweeteners or look for natural non-caloric sweeteners.

On the positive side, although 60 percent said they wouldn’t give up snacks or sodas, they did say they’d prefer smaller portion sizes.

But cost was cited by about half of the most overweight and obese participants as a reason for not buying healthier food. And the healthy group was both wealthier and better educated.

Physical activity was also an issue. One-quarter of the most obese group never exercised, compared with 15 percent of the healthy group, the investigators found.

Cardello’s findings were published in June in a Hudson Institute report.

“The historical ‘mass marketed’ message to eat healthier and exercise is doomed to failure for these vulnerable populations,” Cardello concluded.

“For example, labeling alone is not getting the job done,” he said, calling for a greater effort “to determine the best ways to communicate to the mostly overweight/obesity cohorts to identify the optimal way(s) to drive consumption of better-for-you items.”

Lona Sandon is program director of the department of clinical nutrition with the School of Health Professions at the University of Texas Southwestern Medical Center at Dallas.

She expressed little surprise at the findings, noting “it is a well-known phenomenon that more knowledge and education does not necessarily change behavior.”

Sandon added that “much of health messaging is about education and awareness. This may only change the behavior of a few people — people who believe that it will make a difference.”

And, “because reversing obesity is rather difficult to do, people may have tried unsuccessfully to lose weight by eating differently or adding exercise. When their strategy does not work, they perceive those behaviors to be useless,” she explained.

“Overweight and obesity is a social/cultural issue as much as it is a personal behavior issue,” Sandon said. “This means changing how we build cities, work environments, food industry, etcetera. It needs to go beyond awareness and education.” 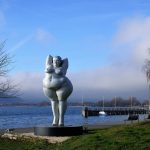