THURSDAY, Oct. 20, 2022 (HealthDay News) – Weight loss soon after a person is diagnosed with Parkinson’s disease may be a sign that mental declines are likely to follow, new research suggests.

“Early weight loss is a common symptom in people with Parkinson’s disease,” said study author Dr. Jin-Sun Jun of Kangnam Sacred Heart Hospital in Seoul, Republic of Korea. “It could serve as a sign that people are at risk of cognitive decline.”

The researchers studied 358 people who had been diagnosed with Parkinson’s about two years earlier, but were not yet taking medications for the disorder. They were compared to 174 people without Parkinson’s.

Participants took tests of thinking skills at the outset and repeated them annually for up to eight years. They also took tests for depression, anxiety and sleep disorders, which can accompany Parkinson’s.

In total, 98 participants lost weight, 59 gained and 201 maintained their weight. Gain or loss was defined as a change of more than 3% of body weight in the study’s first year.

Participants with Parkinson’s disease who lost weight saw their thinking skills decline faster overall compared to those with the disease who maintained their weight. Verbal fluency skills, a measure of executive function, were involved in the steepest declines.

Conversely, people with Parkinson’s who gained weight had a slower decline in their scores on a test of mental processing speed.

The findings were published online Oct. 19 in Neurology.

“These findings highlight the potential importance of weight management in the early stages of Parkinson’s disease,” Jun said in a journal news release. “Further studies are needed to determine whether taking steps to prevent weight loss could slow cognitive decline in people with Parkinson’s.”

Researchers only saw an association rather than cause and effect, and noted that they could not investigate whether the effect of weight change on thinking skills was the same in people who were underweight or obese. They also could not consider whether weight change was intentional or unintentional.

The U.S. National Institute on Aging has more on Parkinson’s disease. 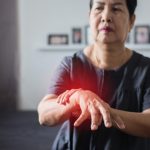