Adding a few miles of biking each day to your commute might add years to your life span, new research suggests.

The British study found that bicycling to work appeared to halve people’s odds for serious disease and premature death.

Researchers from the University of Glasgow in Scotland looked at the commuting habits of more than 264,000 people in the United Kingdom and tracked their health over five years.

Walking to work was also beneficial, but not to the same degree.

The study doesn’t establish a direct cause-and-effect relationship between commuting by bike and longevity.

Still, “if these associations are causal, these findings suggest that policies designed to make it easier for people to commute by bike … may present major opportunities for public health improvement,” said researcher Dr. Jason Gill in a university news release. He’s with the Institute of Cardiovascular and Medical Sciences.

The researchers said cycle commuting may offer greater health benefits than walking because cyclists cover longer distances, get more intense exercise, and have higher levels of fitness than walkers.

For example, cyclists commuted an average of 30 miles a week, compared with 6 miles a week for walkers.

The study was published April 20 in the journal BMJ.

The League of American Bicyclists has more on cycle commuting. 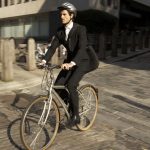