The biggest benefit seems to come from cruciferous vegetables, including cabbage, Brussels sprouts, cauliflower and broccoli. Eating these strong-smelling veggies was linked to less thickening of the carotid arteries, located in the neck.

Thickening of this major blood vessels is a sign of impending heart disease, the researchers said.

“These findings reinforce the importance of adequate vegetable intake to reduce your risk of atherosclerosis [“hardening of the arteries”], heart attacks and strokes,” said lead researcher Lauren Blekkenhorst. She’s a research associate in the School of Medical and Health Sciences at the University of Western Australia.

“Recommendations to include a couple of servings of cruciferous vegetables may optimize the health benefits of increasing vegetables in the diet,” Blekkenhorst said.

She added, however, that this study doesn’t prove a lack of vegetables caused carotid artery walls to thicken, only that there was an association between the two.

Veggies are good for you, Blekkenhorst said, because they’re high in fiber, so you feel full without consuming many calories.

“They are also packed full of vitamins, minerals and phytochemicals, which have been shown to reduce inflammation and oxidative stress,” Blekkenhorst said. Chronic inflammation plays a part in a number of age-related illnesses, including heart disease, she added.

Best of all, the benefits of vegetables exist whether you cook them or eat them raw, Blekkenhorst said. Though cooking reduces some nutrients, eating cooked vegetables aids digestion and absorption of these nutrients, she said.

The benefits found in the study were limited to vegetables like cabbage, Brussels sprouts, cauliflower and broccoli, Blekkenhorst said. Other veggies did not show the same protective link.

She said the value of cruciferous veggies remained even after her team took into account a woman’s lifestyle, heart disease risk, and other vegetable and dietary factors.

Blekkenhorst said it’s important to eat both raw and cooked vegetables throughout the day.

Any way you prepare them, you’ll do your body good, according to a nutritionist not involved with the study.

Vegetables help you fight infection and reduce your risk for mental decline, some cancers, heart disease and diabetes, she said.

“Inflammation plays a big role in the development of atherosclerosis, so it makes sense that eating foods that help lower inflammation may lead to more supple arteries,” Heller said.

“We cannot be certain that the findings will be the same for older men, as the risk factors for vascular disease are different for men and women, Blekkenhorst said. “But it can’t hurt for men to consume more cruciferous vegetables every day.”

Heller said it seems reasonable to think that men would derive the same health benefits from eating a variety of vegetables.

For the study, Blekkenhorst’s team had nearly 1,000 women 70 and older fill out questionnaires about how often they eat veggies.

The researchers used sonograms to measure the thickness of each woman’s carotid arteries and the amount of plaque they contained.

The carotid artery walls of women who ate the most vegetables were about 0.05 millimeter thinner than those who ate the fewest.

That difference might be significant, Blekkenhorst said, because a 0.1 millimeter decrease in carotid wall thickness was linked to a 10 percent to 18 percent lower risk of stroke and heart attack.

On average, each additional half-ounce of vegetables eaten in a day was associated with nearly a 1 percent thinner carotid artery wall, she said.

The report was published online April 4 in Journal of the American Heart Association.

To learn more about diet and heart health, visit the American Heart Association. 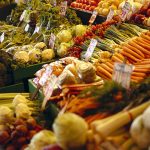