Black American women with low levels of vitamin D have higher odds of developing colon cancer, according to a new research that echoes previous findings in white women.

Researchers used a vitamin D prediction model for nearly 50,000 participants in the Black Women’s Health Study and concluded that those with predicted levels in the bottom 25% had an estimated 40% higher risk of colon cancer than those in the top 25%.

The study was recently published online in the journal Cancer Epidemiology, Biomarkers & Prevention.

“Our findings, taken together with established evidence that vitamin D levels are generally lower in the Black population than other groups, suggest that low vitamin D may contribute to disproportionately high colorectal cancer incidence among Black [people],” study author Julie Palmer said in a Boston University news release. She is director of the Slone Epidemiology Center at the university’s School of Medicine.

Palmer and her team said it’s important to determine if there is a link so Black people who may have an increased risk for developing colon cancer can boost their vitamin D levels.

Vitamin D is involved in many processes in the body and has been shown to have anti-cancer properties. Black people tend to have lower levels because sunlight is the major source of vitamin D aside from taking vitamin supplements, the authors said.

They also noted that Black Americans have the highest rates of colon cancer incidence and death. More than 150,000 people in the United States a year are diagnosed with it, making colon cancer the third most common cancer in both men and women excluding skin cancer, according to the American Society of Clinical Oncology.

The American Cancer Society has more on Black Americans and colon cancer. 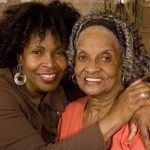