Tai Chi: A Gentler Way to Exercise for Ailing Hearts

WEDNESDAY, Oct. 11, 2017 — People with heart disease who shy away from traditional cardiac rehabilitation may benefit from tai chi.

A small study found that the slow, gentle movements of this traditional Chinese practice may help increase physical activity among those who are reluctant to exercise.

More than 60 percent of heart attack survivors opt out of cardiac rehabilitation, often because of the perception that the exercise involved will be unpleasant or painful, according to the study authors.

“We thought that tai chi might be a good option for these people because you can start very slowly and simply and, as their confidence increases, the pace and movements can be modified to increase intensity,” said study author Dr. Elena Salmoirago-Blotcher. She is an assistant professor of medicine at the Warren Alpert School of Medicine at Brown University.

“Tai chi exercise can reach low-to-moderate intensity levels,” she explained in a news release from the American Heart Association. “The emphasis on breathing and relaxation can also help with stress reduction and psychological distress.”

Participants in the study included 29 people, age 68 on average, who’d had a heart attack or a procedure to open a blocked artery. All were sedentary, and most had risk factors for heart problems, such as being overweight, smoking or having diabetes or high cholesterol. All of them also had rejected participation in cardiac rehabilitation.

For the study, they took part in either a short program (24 classes over 12 weeks) or a longer one (52 classes over 24 weeks). All were given a DVD so they could practice tai chi at home.

Tai chi was found to be safe for the participants with heart disease, with minor muscle pain at the very start the only negative effect. Tai chi also was well-liked by the participants, who all reported they would recommend it to a friend. The researchers said the participants attended 66 percent of classes, suggesting it’s a manageable routine.

Tai chi didn’t boost the participants’ aerobic fitness levels after three months. But those who completed the longer program did get more moderate to vigorous physical activity on a weekly basis, the study reported.

The findings were published Oct. 11 in the Journal of the American Heart Association.

“On its own, tai chi wouldn’t obviously replace other components of traditional cardiac rehabilitation, such as education on risk factors, diet and adherence to needed medications,” Salmoirago-Blotcher said.

“If proven effective in larger studies,” she said, “it might be possible to offer it as an exercise option within a rehab center as a bridge to more strenuous exercise, or in a community setting with the educational components of rehab delivered outside of a medical setting.”

The U.S. National Center for Complementary and Integrative Health has more on tai chi. 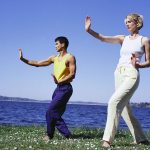