It’s never too late to benefit from regular walks.

A new study suggests that a 10-minute daily stroll can prolong life in folks well into their 80s and beyond.

“Adults are less likely to meet activity recommendations as they get older,” said study author Dr. Moo-Nyun Jin of Inje University Sanggye Paik Hospital in Seoul, South Korea. “Our study suggests that walking at least one hour every week is beneficial for people aged 85 years and older.”

For this new study, Jin’s team looked at links between walking and the risks of death from various causes among more than 7,000 Koreans aged 85 and older.

Compared to inactive individuals, those who walked at least one hour per week had a 40% lower risk of death and a 39% lower risk death related to heart problems during the study period, the findings showed.

Study participants were part of the Korean National Health Screening Program between 2009 and 2014. They completed a questionnaire on leisure-time physical activity, including time spent walking at a slow pace; moderate-intensity activity such as cycling and brisk walking; and vigorous activity such as running.

The research team grouped participants by the time they spent each week walking at a slow pace. About 57.5% did no slow walking; 8.5% walked less than one hour; 12% walked one to two hours; nearly 9% walked two to three hours; and just over 13% walked more than three hours a week.

In all, about 8% of the participants met recommended levels of moderate-to-vigorous intensity physical activity.

Of nearly 3,000 participants who walked at a slow pace every week, one-third said they also did moderate or vigorous intensity physical activity, according to the researchers.

The research is scheduled to be presented Sunday at a meeting of the European Society of Cardiology, in Barcelona. Findings presented at medical meetings should be considered preliminary until published in a peer-reviewed journal.

“Walking was linked with a lower likelihood of dying in older adults, regardless of whether or not they did any moderate-to-vigorous intensity physical activity,” Jin said in a society news release.

He said identifying the minimum amount of exercise that can benefit the oldest old is important since recommended activity levels can be hard to hit.

“The take-home message is to keep walking throughout life,” Jin said.

The U.S. Department of Health and Human Services has more on physical activity guidelines for Americans. 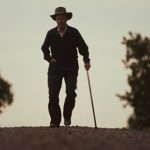