Young women with elevated blood pressure before pregnancy appear to have a greater risk of miscarriage, even if they haven’t been diagnosed with full-blown high blood pressure, a new study suggests.

Risk of pregnancy loss increases about 18 percent for every 10-point increase in a young woman’s diastolic blood pressure (the lower number), which indicates how much pressure your blood exerts within your arteries between heartbeats, researchers found.

The risk also increases about 17 percent for every 10-point increase in mean arterial pressure, or the average blood pressure a person has during an entire heartbeat cycle.

“This is a very, very unique study in the sense that this is the first time we are able to show that not only blood pressure during pregnancy is associated with adverse pregnancy outcomes, but also blood pressure before pregnancy,” said senior researcher Enrique Schisterman. He’s chief of epidemiology for the U.S. National Institute of Child Health and Human Development (NICHHD).

However, the study did not prove that elevated blood pressure before pregnancy actually caused miscarriage risk to rise; it only showed an association.

“They do not really find an association between blood pressure and the ability to get pregnant after adjusting for BMI [body mass index, a measure of body fat based on height and weight], so I think BMI plays a key role, and I think that makes a lot of sense based on what we know,” Stone said of the new study.

For the study, researchers followed 1,228 women who had already experienced one or two pregnancy losses and were trying again to become pregnant. They were part of a clinical trial to see if taking aspirin could ward off miscarriage.

The women had their blood pressure measured twice, once while trying to conceive and again during early pregnancy.

About a quarter of the 797 women who conceived within six months wound up suffering a pregnancy loss. Looking at the numbers, researchers found that blood pressure prior to conception or during early pregnancy had a direct link to the risk of pregnancy loss.

“The higher the blood pressure, the worse the risk,” Schisterman said. “It affects pregnancy at every level, but at higher levels there is more risk.”

It’s not unusual that diastolic pressure was associated with risk as opposed to systolic pressure, which measures blood pressure within arteries during a heartbeat, explained lead researcher Carrie Nobles, a fellow with the (NICHHD).

“For young adults in their 20s and 30s, diastolic blood pressure seems to be a better predictor of later development of cardiovascular disease than systolic pressure,” Nobles said. “That reverses in older adults.”

It’s not completely clear whether blood pressure itself increases the risk of pregnancy loss, or whether it is a marker of other chronic diseases such as obesity or diabetes, Schisterman said.

“We cannot pinpoint what the cause is yet, but all of those factors have been known to cluster together with a risk of pregnancy loss,” Schisterman said.

That said, it’s very likely that blood pressure alone can have a negative effect on a pregnancy, said Dr. Suzanne Steinbaum, director of Women’s Heart Health at the Heart and Vascular Institute at Lenox Hill Hospital in New York City.

High blood pressure “is so profoundly toxic to the arteries that it can actually lead to miscarriage and pregnancy loss,” said Steinbaum, who wasn’t connected to the study.

Women trying to get pregnant should keep an eye on their blood pressure and try to keep it as close to normal levels as possible, through eating a healthy diet and regularly exercising, the researchers and Steinbaum said.

“For women, the real take-home is health and wellness is not something we can think about in terms of what happens to us later in life,” Steinbaum said.

“It can really have such a profound effect. To me this is startling, to know that someone will say to themselves, ‘It doesn’t matter how I eat right now. I’m 30. When I get older I will start paying attention.’ It really does matter and it can possibly affect you during reproduction,” she said.

The study will be published in the May issue of the journal Hypertension.

The Mayo Clinic has more about blood pressure and pregnancy. 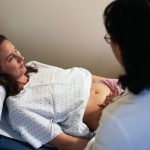