There’s good news for younger breast cancer survivors: Pregnancy does not seem to increase the chances that their disease will return, researchers report.

“Our findings confirm that pregnancy after breast cancer should not be discouraged, even for women with ER-positive [estrogen-sensitive] cancer,” said study author Dr. Matteo Lambertini, a medical oncologist at the Institut Jules Bordet, in Brussels.

Lambertini’s group tracked outcomes for more than 1,200 breast cancer survivors. The research showed that those who became pregnant did not have any higher risk of cancer recurrence and death over an average of 10 years follow-up, compared to women who did not become pregnant.

This was true even if the women had experienced estrogen receptor (ER)-positive tumors.

ER-positive breast cancer is fueled by estrogen, and it was thought that increased levels of the hormone during pregnancy could trigger cancer cells that may linger in the body after treatment to grow.

But the findings may help dispel long-held fears that pregnancy could increase the chance of breast cancer’s return, even for women with ER-positive cancers, the researchers said.

However, they pointed out that women with ER-positive cancer need to interrupt any post-surgery (adjuvant) hormone therapy if they are trying to get pregnant. This hormone therapy helps prevent cancer recurrence, and it is recommended that women receive it for at least five years and in some cases up to 10 years.

“When deciding how long to wait before becoming pregnant, patients and doctors should consider each woman’s personal risk for recurrence, particularly for women who need adjuvant hormone therapy,” Lambertini added.

Dr. Bruce Johnston is ASCO’s President-Elect and chief clinical research officer at Dana-Farber Cancer Institute in Boston. Reviewing the new findings, he stressed that “breast cancer typically is somewhat unusual in women of childbearing age, but it does happen.”

The study “saw no increased risk with pregnancy in the ER-positive population,” Johnston said. “If anything, the risk was a little bit lower, which is a little bit counterintuitive. It certainly appears that pregnancy will not add risk for the cancer returning.”

The researchers were to present the findings Saturday in Chicago at the annual meeting of the American Society of Clinical Oncology (ASCO). Because these findings were presented at a medical meeting, they should be considered preliminary until published in a peer-reviewed journal.

The American Cancer Society has more on pregnancy after breast cancer. 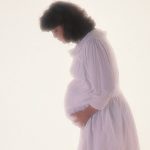