Pot Use in Pregnancy May Harm the Fetus

Marijuana use in pregnancy may increase your child’s risk for stress and anxiety, a new study suggests.

Although some moms-to-be use pot hoping to relieve morning sickness and anxiety, they should know it may cause genetic changes in the uterus that result in children becoming anxious, aggressive and hyperactive, researchers say.

“People are saying that cannabis is benign, and take it for your anxiety and your nausea, but you need to know that it may have long-term effects on your child,” said senior researcher Yasmin Hurd.

“We found that the children, starting at age 3, had changes in their hormone levels, elevated anxiety, aggression and hyperactivity, and even physiological measures of a stress response in the heart,” said Hurd. She’s chair of translational neuroscience and director of the Addiction Institute at Mount Sinai in New York City.

Hurd said the study can’t prove that exposure to marijuana in the womb caused these symptoms, however.

“We can’t say that anything in humans is causal because of the complexity and many confounds,” she noted. In animal experiments, however, Hurd said they found that the active ingredient in marijuana — THC — caused changes in the immune system of pregnant animals.

She believes, however, that women should be counseled to avoid marijuana during pregnancy as they are now warned to avoid alcohol, because of the harm it can cause.

For this study, Hurd and her colleagues followed more than 300 mothers and looked at the childhood behavior of their offspring. When the children were about 6 years old, the researchers measured hormone levels and heart function during stress. They also evaluated the children’s behavioral and emotional functioning based on surveys of parents.

The investigators found that children of mothers who used pot during pregnancy were more anxious, aggressive and hyperactive and had higher levels of the stress hormone cortisol than kids whose mothers didn’t use the drug.

Children of mothers who used marijuana during pregnancy also had changes in their heart rhythm tied to increased sensitivity to stress.

Additionally, analysis of placental tissue of some of the marijuana users revealed changes to genes linked to immunity. This might lead to inflammation and less resistance to germs, the researchers said. And the marijuana-related changes in these immune networks predicted higher levels of anxiety in the children, the study found.

Hurd said that they don’t know if the children will outgrow these issues. If they continue, the behavioral problems can affect education and social development, she said.

“We need to know what happens to these children later in life,” she said. “They may be completely fine, or they may need interventions to help them to overcome some of the behavioral problems they have — that’s really critical,” Hurd said.

Also, an April 2021 study in the journal Addiction found that mothers who used pot during pregnancy were more likely to have premature, underweight babies.

This study suggests using marijuana during pregnancy can have consequences in neurodevelopment throughout infancy and in later years of childhood, said Krakower, who was not involved with the study.

“Future mothers should be cautioned on the use of cannabis during pregnancy, and additional outreach should be considered to target at-risk populations,” he said. “Given that cannabis is becoming increasingly commercialized, it is important to warn the public about potential harms of this agent during the perinatal period.”

The new report was published Nov. 15 in the Proceedings of the National Academy of Science.

For more on cannabis and pregnancy, see the U.S. Centers for Disease Control and Prevention. 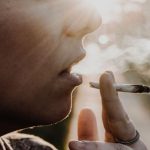