Postpartum Depression Rates Have Tripled for New Moms During Pandemic

Rates of postpartum depression among American mothers rose nearly three-fold during the COVID-19 pandemic, along with large increases in major depression and thoughts of self-harm, according to a new study.

It included 670 new moms who completed online screening between February and July 2020. One-third screened positive for postpartum depression and 20% had symptoms of major depression.

Before the pandemic, about 1 in 8 new mothers had postpartum depression and between 5% and 7% had major depression, according to the U.S. Centers for Disease Control and Prevention.

“We also found that almost 1 in 5 participants who screened positive for postpartum depression reported having thoughts of harming themselves,” said lead author Clayton Shuman, an assistant professor of nursing at the University of Michigan.

“This is very concerning given that prior to the pandemic, [a previous study] found the rate of suicidality among prenatal and postpartum patients is on the rise in the U.S.,” Shuman said in a university news release.

Shuman said the findings underscore the need to identify depression in new mothers. But, he added, screening is only a first step.

“Treatment is pivotal to recovery,” Shuman said. “Resources and education about postpartum depression must be better disseminated and implemented. These resources should be shared with the general public to reduce stigma, and shared with those who provide social and emotional support to postpartum patients, such as partners and family members.”

The findings were published March 14 in the journal BMC Research Notes.

This study was part of a larger one called COVID-19 MAMAS (Maternal Attachment, Mood, Ability, and Support) that spawned several papers about pregnancy and postpartum experiences during the pandemic.

There’s more on postpartum depression at the U.S. Office on Women’s Health. 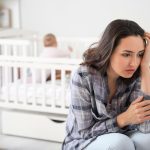