PMS: An Update on Solutions

Up to 75 percent of women experience PMS (premenstrual syndrome) with symptoms like anxiety, irritability and fatigue, health experts say.

PMS is thought to be the result of a chain reaction that starts with the drop of the hormone progesterone near the end of every monthly cycle.

In lab studies, an international team of researchers found that the active ingredient in the antidepressant Prozac can counter this reaction and ease symptoms at far lower doses than needed to treat depression and with quicker results, often within hours.

Want to try a drug-free approach? The minerals iron and zinc have some protective effects. According to research published in the American Journal of Epidemiology, eating a diet rich in non-heme iron can lower PMS risk by up to 40 percent.

The amount of zinc associated with a lower PMS risk is proportionally higher — nearly double the recommended daily amount of 8 milligrams. Food sources of zinc include fortified cereals, oysters and beef.

But don’t overdo either nutrient. The safe maximum daily intake of iron and zinc are 45 and 40 milligrams, respectively. That international research also noted that too much potassium could increase PMS risk.

You might also try exercise and meditation — simple ways to reduce stress, tension and anxiety, all of which can worsen PMS.

On the bright side, research published in the American Journal of Clinical Nutrition found that limiting caffeine — advice often given to women with PMS — isn’t linked to the condition after all and you needn’t give up your morning brew.

For more on PMS, visit the U.S. National Library of Medicine. 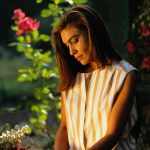