No Amount of Running Is Too Hard on Your Heart

Ultramarathons are grueling races that typically range anywhere from 30 to 100 miles, but new research suggests that even these distances don’t tax the heart unduly.

“The good news is that while experienced runners pushed their heart limits during the ultramarathon, they did not show evidence of cardiac risk assessed through elevated biomarkers [such as cortisol levels],” said co-lead investigator Rodrigo Hohl. He’s a professor from the department of physiology at the Federal University of Juiz de Fora in Brazil.

In the study, researchers conducted blood tests on 25 participants in a 24-hour ultramarathon before and after the event.

The higher levels in the experienced runners reflected the greater load on the heart, according to the authors of the study published recently in the journal Heliyon.

He noted that ultramarathon runners self-pace for a set time and towards an established endpoint. Runners with different levels of training experience and competitive results have variations in running speeds and, therefore, different levels of heart biomarker in their blood.

“Novice runners appear to pace themselves well below their cardiac limit, self-selecting a safe pacing strategy for their hearts,” Hohl said.

Despite the findings, ultramarathon runners shouldn’t consider themselves free of risk from heart damage, according to the researchers.

“Our study provides evidence for caution and self-monitoring, especially for experienced runners,” Hohl said. “After participating in an ultramarathon, runners should recover for at least two days before running any significant distance. This time is needed to normalize cardiac markers and allow the heart time to recover after such a challenge.”

ULTRAmarathonRunning.com offers resources on training for an ultramarathon. 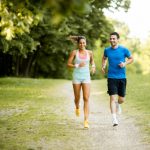