New Year’s Resolutions: What’s the Best Way to Make — and Keep — Them?

New Year’s resolutions can be a fickle thing.

They are a time-honored way to promise improvements to yourself and your behavior, a “fresh start” to the new year.

But if chosen poorly, a resolution also can be a source of anxiety, disappointment and hopelessness.

“They tap into the abiding American spirit of relentless self-improvement, and that can be so relentless that it translates into additional stress,” said John Norcross, chair of psychology with the University of Scranton in Pennsylvania and author of “Changeology: 5 Steps to Realizing Your Goals and Resolutions.”

About one in four Americans cite their resolutions as a source of anxiety heading into the new year, according to a new poll by the American Psychiatric Association.

Choosing an appropriate resolution — and realistic ways to follow through on it — can help relieve some of that stress, experts say.

“The number one difficulty we encounter is that people make truly unrealistic, grandiose expectations,” Norcross said.

Still, it makes sense that people would set lofty goals for themselves as the year turns, said Dr. Rebecca Brendel, president of the American Psychiatric Association.

“There’s this temptation when the year switches from 2022 to 2023, then it’s a fresh start and everything in the past is all history,” Brendel said.

But those goals are more attainable when they’re built on a better understanding of yourself.

“In reality, we know that all the things that we want to change about ourselves don’t just disappear with a line in the sand because it strikes midnight on January 1st of 2023,” Brendel added.

The best way to pick a resolution is to take stock of your current lifestyle and then, armed with that awareness, choose self-improvements that are attainable.

“Small changes are much more sustainable than radical interventions to restructure or redesign our lives. It’s really focusing on progress, not perfection,” Brendel said.

“We help people break it down into scalable, doable steps that may in fact lead to a larger goal,” Norcross said. “But it really does need to be realistic or it does indeed become a recipe for disaster.”

Take, for example, the person who says they will exercise every day for a year when they’ve never made exercise a regular part of their life.

“Instead saying, ‘I’ll start walking one or two days a week,’ is far more scalable and realistic,” Norcross said.

Once that’s been achieved, the person might then add a few more walking days to their week, or decide to walk longer distances.

“If you’re someone who doesn’t really like to exercise all that much, you’re not all of a sudden overnight going to become somebody who’s going to run a marathon in the next six weeks,” Brendel said. “Really think about ways of building in positive change to the things we already do, into the routines we already have.”

Keeping notes or a little journal can help keep track of these smaller accomplishments, Brendel added. Note the positive steps you take each day or week, and perhaps even list one or two things you’d want to accomplish in the week ahead.

“That can help us see that we’ve made some change over time, and the things that maybe we want to pay a little bit more attention to just to be really mindful,” Brendel said.

Change for yourself, not others

Another tip is to make a resolution based on your own needs rather than what you think others would expect or admire, said Pauline Wallin, a clinical psychologist in Camp Hill, Pa.

“Losing weight is a very popular New Year’s resolution. If it’s to look good for your high school reunion, that’s an external motivation,” Wallin said. “But if it’s for health reasons — you want to be healthy and you have an additional motivation to be healthy, let’s say blood tests showed you had high cholesterol or whatever — then you are more internally motivated to stick to any kind of change that you would be starting.”

“What sabotages people is not that they don’t know what to do, but that they aren’t prepared to do the work,” Wallin said

“It depends on how you talk to yourself about it. Let’s say your muscles ache because you’re exercising or you feel a hunger pang. Well, that’s a good sign, right? Because you’re actually making changes in your body,” she continued.

“If you talk to yourself and say ‘this is so hard,’ you’re going to feel powerless,” Wallin said. “But on the other hand, if you say, well this is challenging, but I’ve experienced worse and I can manage it — self-talk is very important.”

Having a friend along for the ride also can help, Brendel said.

“Something that helps people be much more successful in making change is bringing somebody else in. Having an accountability to another person,” Brendel said. “If it’s around exercise, for example — which is the number one resolution Americans in our poll wanted to take on — being accountable to go exercise with someone else, meet somebody, even just to walk or to go to the gym makes it both social and adds a degree of accountability and a higher likelihood of success.”

And keep in mind that perfect is the enemy of good. You might lapse or not meet a goal, but that doesn’t mean you should give up.

“There’s good science that how you think and behave when you encounter inevitable backsliding is very important,” Norcross said. “You don’t give up. A slip doesn’t mean a fall. A single lapse does not constitute an entire relapse.”

The Cleveland Clinic has more about keeping New Year’s resolutions. 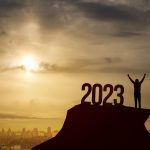