Depression, anxiety or other forms of mental distress may significantly boost the risk of heart disease among older adults, new research from Australia suggests.

The finding is from a four-year study that tracked psychological distress among nearly 222,000 seemingly healthy men and women, aged 45 years and older, with no prior history of heart disease.

“Our study adds to the growing evidence of a link between depression and anxiety and increased risk of heart attack and stroke, and suggests that this link may not be explained solely by factors such as lifestyle and presence of other diseases,” said study lead author Caroline Jackson.

By the study’s conclusion, Jackson and her team found that — even after accounting for variations in smoking, drinking and dietary habits — the risk of heart attack rose by 18 percent among women and 30 percent among men coping with a high or very high degree of mental distress. (The risk faded somewhat among men 80 and older.)

“The sex differences were intriguing,” said Jackson. She noted that “the stronger association between psychological distress and heart attack in men could be due to women being more likely than men to seek primary care for mental and physical health problems, thus partly negating the possible physical effects of mental health problems.”

Or, “alternatively, it could reflect the known hormonal protection against heart disease in women,” she suggested.

Jackson is currently a chancellor’s fellow with the Usher Institute of Population Health Sciences and Informatics at the University of Edinburgh in Scotland.

The study findings were published in the September issue of the journal Circulation: Cardiovascular Quality and Outcomes.

All of the study participants were enrolled between 2006 and 2009 in the Australian “New South Wales 45 and Up” study.

All completed an initial 10-question survey, which asked respondents to indicate to what degree they felt depressed, hopeless, cheerful, fatigued, restless or sad. Their answers were then used to assess psychological distress levels, which were characterized as low, medium, high or very high, according to a standard distress scale used by health professionals.

Just over 16 percent of the participants were found to have moderate psychological distress, while just over 7 percent were at the high or very high mark.

Those figures were then cross-referenced with the roughly 4,600 heart attacks and 2,400 strokes that took place during the study time frame.

The result: the research team determined that the risk for both heart attack and stroke rose incrementally as psychological distress rose from low to high.

Based on the findings, Jackson is calling for more research to pinpoint how mental distress seems to increase heart health risk.

In the interim, anyone experiencing psychological distress “should be encouraged to seek medical help,” she said.

Heart specialist Dr. Gregg Fonarow is co-chief of the UCLA division of cardiology, in Los Angeles. He was not part of the current study, but said that while “few have looked closely at potential differences among different age groups and by gender or sex,” many studies have previously identified a link between mental health and heart health.

“Psychological distress induces a variety of physiologic changes that may contribute to increased cardiovascular risk,” he explained. Fonarow added that only further study will tease out whether gender plays a significant role in the effect of stress on the heart.

There’s more on mental health and heart health at the American Heart Association. 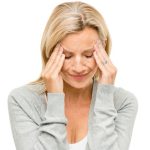