From the hills of Hollywood to the halls of Congress, it’s now clear that sexual harassment in the workplace has long been a fact of life for working women.

But while the media highlights high-profile firings — NBC anchor Matt Lauer and NPR showman Garrison Keillor among the latest — little attention has been given to the stresses sexual harassment places on its victims, mental health experts say.

People who are sexually harassed often struggle with psychological problems caused by their workplace ordeal, which can lead to issues affecting physical health, according to the experts.

But now, the United States may have reached a tipping point where victims are unwilling to suffer in silence any longer, said psychologist Kim Elsesser, author of Sex and the Office: Women, Men and the Sex Partition That’s Dividing the Workplace.

“People feel they are more likely to be believed and taken seriously if they come forward,” Elsesser said. “Social media attention and media attention on the high-profile perpetrators has made other women feel more powerful and stronger in coming forward.

The road to this point has been a tough one for millions of women, however.

Bouts of depression, anxiety and stress are the least of the psychological problems caused by sexual harassment, said Ann McFadyen, an associate professor of strategic management at the University of Texas at Arlington.

In more severe cases, victims can suffer flashbacks and panic attacks that occur as part of post-traumatic stress disorder, McFadyen said. They also may be more inclined to develop a substance abuse problem or attempt suicide.

“The anxiety becomes pretty intense and regular,” said Debra Borys, a Los Angeles psychologist who specializes in the causes and impact of sexual harassment. “Women can come to dread work. It affects their concentration. They can become depressed and feel helpless.”

These health problems can crop up even if a person isn’t a victim of outright sexual assault, McFadyen said. Sexist behavior and unwanted sexual attention can be detrimental to a person’s health if it occurs as a matter of course in the workplace.

“If it’s frequent but not intense, that still can kind of wear you down over the long term,” McFadyen said.

The relative power that the perpetrator has over the target also can play a part in how strongly sexual harassment affects someone, Elsesser said.

“If the person who is sexually harassing doesn’t have very much power related to the target, then there are far fewer or no physical or work-related symptoms,” Elsesser said. “If the guy in the mail room is harassing you, it might be annoying but you’re going to experience fewer symptoms than if it’s your boss.”

“It can be especially pervasive where there’s a lopsided percentage of men in the power structure versus women,” Borys said.

In the past, career women have been tempted to say nothing when faced with low-level harassment like sexist comments, leers and innuendo, Borys said.

“I think sometimes women were thinking the way to be strong is to pretend it doesn’t get to you,” Borys said. “It would be handing some kind of victory to their harasser.”

But now, some sort of profound change has occurred in America that makes victims less likely to put up with it, the experts contend.

“I think what we’re seeing is people waking up to something that’s all around them and has been all around for a very long time,” said John Pryor, a professor of psychology at Illinois State University.

“There’s this cascading effect of people coming forward saying they’ve been sexually harassed,” Pryor continued. “Saying that in the past has been a stigma in some ways. By having all these people come forth saying me too, I suggest it’s going to remove some of the stigma so people are more likely to share their feelings about what’s happened to them.”

‘You could say maybe they’ve been pushed to the limit’

The election of President Donald Trump, in particular, might have driven some to the point where they aren’t willing to accept harassment in their work lives, Pryor and Borys said.

More than a dozen women came forward during the election to accuse Trump of sexual misconduct, according to published reports. And at one point a videotape surfaced from “Access Hollywood” in which Trump bragged about sexually assaulting women.

“You could say maybe they’ve been pushed to the limit,” Pryor said. “You see that Donald Trump has been accused by people who will testify under oath that he’s done similar kinds of things to them. I know personally a lot of women who are pissed off about that, as they well should be.”

This current series of events could reflect a permanent societal reshuffling of what’s acceptable in the workplace, the experts said.

“I really hope this is a watershed moment. If we’re going through all of this and nothing changes, that would be really sad,” Elsesser said. “It certainly has sparked dialogue about it. People are being fired. We just need to keep the momentum going and figure out how to bring this change into the smaller organizations, to people lower down in middle management and below.”

As a result, some people who sexually harass others are likely to stop because they don’t want to face the consequences to their career, Borys said.

More profoundly, the news is causing some men to question whether behavior they had thought innocuous might have been doing harm to female colleagues, Borys added.

“For men who actually never understood before what women experience when someone in the workplace starts focusing on their looks or asking them out repeatedly and some of the other non-violent forms of harassment, I think there are some in that group where all of the publicity and all that’s being written about the impact on women is causing some consciousness-raising,” Borys said.

However, the experts also expressed concern that this wave might have unintended negative consequences later on for women in the workplace.

Elsesser worries that the new focus on sexual harassment might make it harder for men and women to work together.

Women might have a more difficult time finding male mentors, for example.

For more on sexual harassment, visit the American Association of University Women. 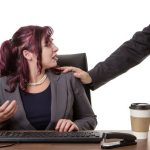