Mood swings. Hot flashes. Night sweats. Bad sleep. These are all debilitating symptoms of menopause, but now new research suggests they can start long before a woman stops having periods.

“Women in the late-reproductive stage who are menstruating regularly but noting changes in cycle length or duration may experience many symptoms typically associated with the menopausal transition,” said study author Yamnia Cortés. She is an assistant professor at the University of North Carolina — Chapel Hill’s School of Nursing in Durham, N.C.

During and around menopause, the production of the female hormone estrogen declines. Women in the United States usually experience the menopausal transition between the ages of 40 and 58, according to the North American Menopause Society (NAMS).

The time immediately before menopause is known as perimenopause. By contrast, the late-reproductive stage precedes perimenopause and is characterized by subtle changes in menstrual cycle length, duration and flow. This is when fertility begins to decline, and hormone patterns start to fluctuate.

For the study, more than 350 Spanish-speaking women aged 35 to 55 completed a survey on their menstrual cycle patterns, and symptoms sometimes associated with menopause.

What did the researchers find? A similar proportion of women in both the late-reproductive stage and menopause transition group reported 8 of 18 common menopause symptoms, including sleep disturbances, forgetfulness, difficulty concentrating, fatigue, irritability, anxiety, sadness, headache, and urinary frequency, urgency or leakage.

Sleep disturbances such as having a hard time falling asleep or waking up in the middle of the night topped the list of symptoms for women in both groups, the study showed.

Women in the late-reproductive stage were less likely to report musculoskeletal problems and decreased interest in sex than menopausal women. Both groups of women said that their symptoms interfered with their relationships and overall quality of life.

The new study was published Jan. 10 in the journal Menopause.

Being forewarned is being forearmed, said Cortés. “Have a conversation with your health care provider about what to expect during the menopausal transition and what steps you can take now to prepare,” she advised.

There are lots a woman can do to stave off these symptoms before, during and even after menopause, said NAMS medical director Dr. Stephanie Faubion, director of the Mayo Clinic Center for Women’s Health in Rochester, Minn.

If symptoms are relatively mild hot flashes or sleep disturbances, women can try to implement lifestyle modifications to address these, Faubion said.

Women can take a symptom-based approach for other concerns. For example, sleep hygiene measures — including avoidance of caffeine, heavy exercise or lots of screen time before bed, moderation of alcohol, and maintenance of a regular sleep-wake cycle — can improve sleep, she advised.

If symptoms are more bothersome or are affecting quality of life, see your health care providers for discussion about treatments, possibly including birth control pills if contraception is still needed, Faubion suggested.

“An antidepressant may be helpful for women who are primarily experiencing mood symptoms,” she said. “Women with vaginal dryness could try using a vaginal moisturizer on a regular basis to help maintain moisture or a lubricant for sexual activity.”

The new study highlights a window of vulnerability for an increase in mood issues for women, said Laurie Jeffers, a certified menopause specialist in the Center for Midlife Health and Menopause in the department of obstetrics and gynecology at NYU Langone Health, in New York City.

“Subtle differences in menstrual length and flow correspond to changes in hormones,” she explained, so women should start discussing their menstrual cycle length and symptoms with their health care provider at a younger age.

“It is key for women to track their cycles and become really knowledgeable about them,” said Jeffers, who had no ties to the study. “It is low tech and simple, and we get the most data from this as we can see subtle changes in the later reproductive stage that we wouldn’t unless we were tracking.” 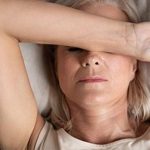