Exercising may keep you young at heart.

Researchers found that people who make regular exercise a lifelong habit appear to slow the aging of their heart and blood vessels. The finding stems from a comparison of exercise histories and heart health among 102 people over age 60.

Those who had exercised two to three times a week for at least a half-hour a day for many years had more “youthful” — that is, less stiff — middle-sized arteries, the researchers found. Middle-sized arteries supply oxygen to the head and the neck.

But study participants who had routinely exercised four to five times per week had more youthful large, central arteries, ones critical to providing blood to the chest and abdomen.

“This work is really exciting because it enables us to develop exercise programs to keep the heart youthful and even turn back time on older hearts and blood vessels,” said study author Dr. Benjamin Levine. He’s director of the Institute for Exercise and Environmental Medicine at Texas Health Presbyterian Hospital Dallas.

Levine’s team only looked into how often a person exercised, but not the type of exercise or its intensity. Those factors could have played a big part in participants’ arterial health, the researchers said.

They also didn’t consider the participants’ diets or socio-economic backgrounds. Only an association was seen between exercise and condition of arteries.

The study findings are detailed in The Journal of Physiology.

Levine said the next step is to see whether two years of exercise training in middle age would help reverse aging of the heart and blood vessels, for people with and without risk factors for heart disease.

“Previous work by our group has shown that waiting until 70 is too late to reverse a heart’s aging, as it is difficult to change cardiovascular structure even with a year of training,” he said in a journal news release. 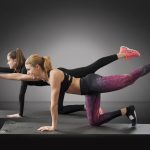